An X-Rated Evening with Greta Christina (and company)

X: The Erotic Treasury continues to impress me with each new story. I don’t know when I’ve read such a consistently strong and powerful collection of erotica. No story is more powerful and thought-provoking for me than Greta Christina’s “Deprogramming.” My first taste of Greta Christina’s smart, humorous writing was “Are We Having Sex Now or What?” in Best American Erotica 2008. I think this is required reading for everyone 18 and over, and I’m planning on being a cool enough mom that my sons will be getting a copy with their gifts as I’m putting those eighteen candles on their homemade almond cake.

In her essay, Christina asks the questions about what “sex” means that most of us are too shy or otherwise repressed to express publicly. Even when such questions do surface in public, as they did with the Monica Lewinsky scandal, our society still doesn’t seem able to discuss it in an intelligent, nuanced way. I, too, started out in my early years keeping a tally of lovers as if this was somehow significant. Eventually, I, too, began to wonder why a really bad lay should qualify, while a much more satisfying make-out session did not. Over the years the territory I label “sex” also expanded, although different types of eroticism call for different moral parameters. The essay gives no easy answers, but it does get you thinking about these issues, which is my definition of a piece worth reading. For example, is an erotica writer’s connection with an anonymous reader “sex”? What do you think?

As you might expect, “Deprogramming” engages the intellect as well as the libido. Simultaneously disturbing and arousing, this story dares to explore the most complex workings of our imagination. The story is told from the point of view of a former cult member who is attempting to move on with her life by replaying a public punishment scene from her past. This is much more than your typical spanking story—it’s a head-on wrestling match with issues of the abuse of power, whether by a real parent or a surrogate one, and the fascinating way humiliation is often transformed into fuel for sexual fantasy. But don’t take my word for it, Greta Christina says it best in her interview below. I’ll be sharing the podium with her at two X readings over the next two weeks—and it’s a true honor! 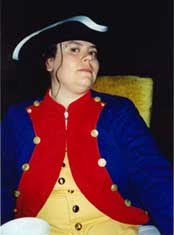 And now, Greta Christina on “Deprogramming”

Susie Bright: Has any of your writing been produced in popular films or videos?

Greta Christina: Well, I wrote the narration for a video how-to guide on electrical sex toys, titled "Our Friend the Volt."


You were raised as an atheist, but when do you remember being fascinated with the "cult" experience?

I wouldn’t describe myself as fascinated by cults, although I do find religion in general to be a compelling subject.

But it sounds like what you want to know is what inspired me to write this piece. It's not a very nice story, but it is a true one, so I'll tell it.

I was watching a documentary about Jim Jones (of Jonestown fame) and his
People's Temple. At the point in the story where things were starting to go wrong in the church, it said that members of the church who disobeyed the rules were punished by being spanked.

My story isn't specifically about the People's Temple. It's about a fictional religious cult that I made up. But it's definitely influenced by real cults that I've read about...

Have you written any Manifestos?

Definitely. Many times. In my blog. Probably the best known and widest read is "Atheists and Anger"— an attempt to answer, in detail, the question, "Why are you atheists so angry?"


Has your work ever been "made an example of"?

The best example: I wrote a piece a few years back for The Skeptical Inquirer, called "Comforting Thoughts About Death That Have Nothing to Do With God."

The piece talks about how, although it might seem that an atheist philosophy has no comfort to offer in the face of death, in fact this is not the case. And it offers, as examples, some of my own atheist thoughts about death that I find comforting and hopeful. I started ego-Googling my name and the title of the piece... and found that several Christian ministers were quoting from the piece out of context, as an example of how even atheists admit that life without the promise of life after death is bleak and hopeless.

No, really. Here's how they did it.

They would quote the part at the beginning, where I talk about how atheism seems to offer no comfort in the face of death. And they would completely ignore the entire point of the piece... which is that, while that might seem on the surface to be the case, it most emphatically is not.

FYI, when I find that happening, I write to these ministers; point out that they're quoting me as saying the exact opposite of what I'm actually saying; and remind them about the commandment against bearing false witness against your neighbor.
Posted by Donna at 10:24 AM

"I was trying to capture that feeling of being simultaneously horrified and turned on."

Wow, that seems quite a straightforward and courageous examination of the topics at hand. I appreciate the willingness of a writer (or anyone, really) to face that as such -- though I haven't read the story, it makes me want to thank Christina for doing so and for offering it as such via writing.

Thanks for posting, Donna, and have a fabulous time at your reading!!

I just had to post and say -- what a powerful, funny, sexy reading you gave tonight! You are a gifted performer. I knew you wrote well but I had no idea you had such a sexy porn-reading voice, and such deliciously naughty (though never overdone) facial expressions! Did they teach you that at Stanford? :-) My friend who came with me to the reading said he thought you were amazing. Very cool.