One of the other authors reading with me this Thursday will be Pam Ward, whose story, “A Clean, Comfortable Room,” was absolutely riveting in its cinematic evocation of scene and detail. As you might expect, the room at the heart of the story is neither clean nor comfortable, but I was reminded how sensuality need not be all about the pretty and sweet. In fact, our senses are heightened in a different, but no less arousing, way by what keeps us on edge. In her interview below, Pam says she loves Hitchcock, which sounded right to me because her story gives us Hitchcock without censorship. And yep, it's good!

I’m looking forward to hearing this one read “in the flesh”! 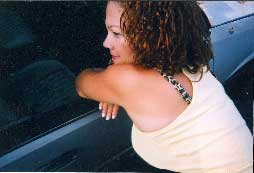 And now, Pam Ward on "A Clean, Comfortable Room"

Pam Ward: I wrote my first short story when this chick by the coffee machine at a place called The Women's Building in L.A.— she told me I should try and write.

I was gabbing my head off about one of my exploits while really trying to coax her to share her cream.

After that, I sat in Michelle Clinton's and Bob Flanagan's class at Beyond Baroque and found a flyer for this new 'zine called Caffeine which was looking for poets. Next thing I know I'm a published poet.

I wrote my first novel, WANT SOME GET SOME, during the L.A. riots. None of my design clients would come to my neighborhood so I had lots of free time. I could really see the haves and have-nots. Living near a cemetery aided in me writing book two, BAD GIRLS BURN SLOW which is my favorite. It’s about hidden identity. I’m a light skin black chick so I see and hear more than I should. If I was a guy I’d be a cross dresser.

Tell me how you would cast the film version of your story...

Okay, first off we have got to cast the fat-belly, banjo playing, road hick as Dennis Quaid. But homeboy has to agree to eat cinnamon rolls all day and mountains of baked beans with pork until he gets Raging Bull, huge.

The on-the-run-chick should be Halle Berry if she'll roadkill some of her beauty. She played a great crack head so she could pull it off if she summons up some of that Monster Ball.

What are you own inspirations for murder-loving authors who scare the daylights out of you?

I loved Henry Farrell, the dude who wrote "What Ever Happened to Baby Jane?" and "Hush Hush Sweet Charlotte". I was blown away by those stories. He was so camp, so LA— and most of his stuff was done in Hancock Park which has a wonderful decaying history.

I love Hitchcock too. He was a true minimalist and got it right on. I'm a girl for a good psychological drama. I love ruthless woman or aging broads with knives who will stop to look in the mirror first before the kill.

It’s not that my female characters are unrepentant, they're usually leveling the playing field. They recognize the card they've been dealt and play it as it lays. My chicks win over abject cruelty or violence and only pull the trigger in self defense.

Did you attend college? If so, which one? What was your major?

I went to UCLA and graduated as a Political Science major. I loved reading court cases. Since I have both cops and robbers in my family I was very attracted to crime and hellbent on being an attorney. But I was an art major too and ended up getting a job as a graphic designer instead. I think I made the right choice. A friend of mine who did go the law school thing is rotting in a jail cell now because of a horrible scam that backfired. That could have easily been me.

How would you describe yourself in a phrase, school-wise?

I'm a nerd with a con artist heart. In elementary school I palmed candy from a liquor store and then sold it for profit.

I loved school so much I would do other people's homework, and ran a small homework business for money. I wrote term papers while I was a senior in high school for my college-educated boyfriends. I liked research and writing.

If you can write, school is a breeze. I did get stumped in a logic class that kicked my ass.

Are you now, or have you been a sex worker?

I was elated because he moved me up to designer. It was very exciting and I designed many logos and brochures. John Holmes was naked on my desk every damn day. Well, his picture was.

What comes to mind when you consider your ancestors, who they were...

My grandparents are from lynch-mob Mississippi. Maybe that's why they came here as kids. That's why I say third-generation, because my grandfather came to LA at four years old. My dad was an architect from Pasadena and my mom was from Watts. It was a great combination.

Totally cool, Alana. I look forward to meeting her.

I'd love to meet you, too. YOU sound like a cool chick!