All right everyone, get your appetites ready! Tomorrow is the day we’ve all been waiting for—the inauguration of our sensual blog feast. Here is the invitation and of course, you’re all invited. 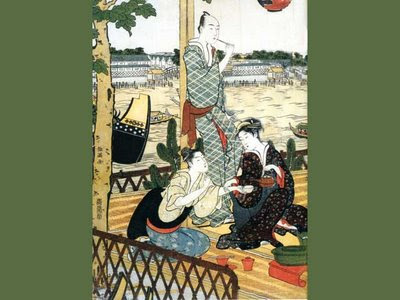 Join Us for a Sensual and Provocative Progressive Dinner ala Blog
Come join us for a sensual feast to celebrate the new year of hope, promise, and delicious pleasures of every flavor. Each day a new erotica-writing blogger will be your host for one sumptuous course, providing recipes, entertainment and scintillating discussion topics. Best of all, dinners ala blog are known to expand your mind, but not your waistline. The festivities begin on Sunday, January 25. Come to one, come to all—you deserve a little indulgence!

I know all of the blogger hosts have been busy decorating, auditioning musical entertainment, thinking up witty discussion topics, and of course, working out the kinks in their scrumptious recipes. My kitchen has been a mess for the past few days—Japanese food is light and delicious, but all of those small plates require a lot of separate prep and a lot of dirty dishes. I definitely had to tweak the recipes a bit, but I was very pleased at the result: carnally satisfying, but intellectually uplifting fare. I can’t wait to share!

Now this may seem like a strange diversion from the topic at hand—but have any of you read the Betsy-Tacy books, especially the high-school years, by Maud Hart Lovelace? This was one of my favorite series as a child. I could really relate to Betsy, who wants to be a writer, and the descriptions of her life at the turn on the twentieth century in the small town of Deep Valley enchanted me. (Btw, sort of thanks to me, my sister is now literary executor for Maud Hart Lovelace, but that’s a long story). Anyway, as I was getting all worked up for our eroticists’ progressive dinner, I remembered a passage from Betsy Was a Junior, which is doubtless one of the tiny seeds of many that led to the blossoming of this blog progressive dinner. Betsy’s older sister is a college freshman and is being courted by a sorority. Although still in high school, Betsy and her friends have decided to start a sisterhood society of their own. It all ends tragically, but this part of the story obviously stayed with me.

Next came the Okto Delta progressive dinner. This was for girls only and each course was served in a different home. It was exhilarating to troop from house to house in the biting cold.

They went to Winona’s for the appetizer. With the fruit cup, each one received a favor. They went to the Rays’ for the fish course; to the Kelly’s for turkey; to the Mullers’ for salad.

For place cards, Tib made cartoons of the girls; Betsy was shown in the new red princesse dress and out of her mouth in a balloon came “David Copperfield.” At Irma’s, where there was black and orange icing on the cakes, the place cards were slams again. “Silence is golden,” Betsy’s said. After dinner coffee was served at Carney’s along with apples, nuts and candy. Nut meats had been removed from the walnuts and mottoes were sealed inside. Betsy’s said:

“Silence is more eloquent than words.”

“The boys were almost crazy,” Betsy wrote to Herbert, her Confidential Friend, “because they couldn’t make out what kind of party it was, nor whose house it was at, nor anything. Their royal highnesses were offended to think we could have any fun without them.” Perhaps the progressive dinner turned the trick. At any rate, the boys decided to get up a fraternity….

The weird thing about revisiting this passage is that it’s much plainer than I remember, plus there are too many semi-colons! In my imagination the “exhilaration” took on sensual substance. Each house was cast in golden light, music drifted invitingly into the cold evening air. The food offerings were delicious, even decadent—not homey fruit cups, although in the 1900s I supposed this wouldn't have been as bad as canned peach and pear chunks in heavy syrup with a single dyed cherry for color.

But sometimes fantasies can become reality. All it took was forty years and meeting some very cool and sensually-minded grown-up Betsy’s and half-crazed boys wanting to join in the fun to make this happen. Thank you all for making my childhood dream come true!
Posted by Donna at 10:02 AM

Well, what the heck ... I figured as long as I was half-undressed, I might as well be half-crazed, too.

I thought you might relate to that one, Jeremy!

And you do look so good in almost-nothing-but-your-fedora!