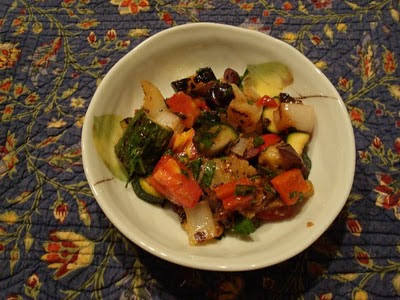 I wanted to share a recipe I prepared yesterday for a summer picnic dinner party, as a few people asked me how you make "grilled" ratatouille. It's really tasty and has earned its place our favorite summer company dish. Don't be too worried about over-grilling. Deeply browned veggies make for a very rich, smoky flavor. This pairs well with a hearty red country French wine like Clos La Coutale Cahors. Bon Appetit!

Cut the eggplant into 1/2-inch slices. Salt the slices and place in a colander for 30 minutes, then rinse and drain. Peel the onions and cut in half; pierce with a skewer or toothpicks if they’re falling apart. Steam or microwave until just tender. Cut the zucchini in half lengthwise.

Prepare grill. Brush the vegetables lightly with Olive Oil-Lemon Marinade. Grill the eggplant on both sides until nicely browned and quite tender, about 15 minutes total. Grill the onions and zucchini on both sides until marked with brown and tender, about 10 to 15 minutes total. Place the bell pepper directly on the grill and turn frequently, allowing all sides to get charred. Remove and place in a paper bag to steam.

When all the vegetables are cool enough to handle, chop into fairly large chunks and combine in a serving bowl. Slip the skin off the pepper, then remove the core and seeds. Cut into small squares. Stir in the tomato, olives, and herbs. Add just enough olive oil to make the salad glisten. Add the vinegar and toss well. Season to taste with salt and pepper. If desired, sprinkle the top with crumbled goat cheese. Serve warm or at room temperature.

Combine the ingredients in a small container. When brushing on the vegetables, swirl the mixture around with the brush often to keep the oil and lemon combined.
Posted by Donna at 3:08 PM 9 comments:

Conversing with Your Hips

"Yes, Master" originally appeared in print in Pleasure Bound, edited by Alison Tyler, and I spoke a bit about the allure of genie power when the story made its debut. Today I wanted to share an excerpt that contains my secret favorite part of the story. I always have a special little sensitive spot in each story that is not the most sexually explicit area (usually), but that nonetheless expresses a truth about my experience. In this story, the truth has to do with missionary position sex, more specifically, how I came to appreciate the potential of this symbolically fraught variation of amour.

Hmm, maybe this is too much information, but back in my dewy youth, woman-on-top sex was an immediate favorite with me because I could control things: the angle, the pace, well, everything. When I was on the bottom, the parts didn't naturally fit together as well and so I came to think of it as a "for him" part of the experience. I didn't even really try to make it work for me. But then, one day--or was it a night?--during a slow, leisurely, summer-style encounter, I started working it from the bottom the way I liked it. My partner (you can probably guess who that is, but I'm trying to be discreet here) responded in kind and it became a kind of conversation, just as I describe below. When you talk and listen with sensitivity--with ears, lips, and other parts of the body, too--you can learn some very interesting things.

An Excerpt from "Yes, Master":

It might look like I fucked Tony Rossi from Product Development on our first date, but it was more complicated than that. We’d been having lunch together for months and flirted pretty heavily through several happy hours when he finally asked me out on an “official” date to see a play in late October. We had such a good time we ended the evening naked in his bed—no surprise for two people who’ve been attracted to each other for some time. Except for one thing.

After we were both hot and ready, Tony rolled on top of me, and I thought, okay, I’ll endure this for a while and then show him how I can actually get off. But as he started moving this way and that, it actually started to feel…good. Very good. It’s as if we were having this little conversation with our hips. He’d ask a question, slowly, teasingly. I’d reply with all the right answers, and damn if it wasn’t feeling better and better as our lower regions discovered all sorts of things about each other. Until, surprise of all surprises, I was coming, just from old-fashioned missionary-style fucking alone.

I had to see if it was a one-time fluke, so after a reasonable breather, I pulled Tony on top of me again.

Ten condoms and a half-dozen positions later, it was Sunday afternoon and we still hadn’t gotten out of bed except to make some coffee and pay the pizza delivery guy. Tony seemed as enchanted as I was.

Unfortunately, reality intervened and he told me he had an early flight on Monday and would be in Pasadena all week on business. However he was anxious to know if I was free the following Saturday.

“Sorry, I’m going to Dana’s Halloween party. You know Dana in Marketing, right?” Smitten as I was, I had a strict policy not to stiff my women friends for any guy.

“I was invited, but I was going to blow it off.” He smiled. “Do you have your costume yet?"

“I’m going as Jeannie, you know, from that old TV show.” I sat up, folded my arms and did my best imitation of a Jeannie nod. “Yes, Master, you called?” I gave Tony a look that promised everything. “Sure you can’t make it?”

Today at F-Stop, Kirsty Logan takes on the writer's--no, really our human--urge for attention, the desire to be seen and appreciated. At 18, Kirsty posed nude for a series of amateur photographers. At 26, she looks back on those days, her motivations and her decision to reveal the fact that because of these images floating around in the ether, an educated, articulate writer is literally "naked on the Internet." It's thought-provoking, poignantly familiar, and ultimately inspiring--the perfect read for a Sunday morning. I highly recommend her very moving essay at The Rumpus as well, the perfect companion piece (and a big splash of cold water if you've ever romanticized the job of artist's model). Oh, and great tattoos--wings to fly!
Posted by Donna at 7:10 AM No comments:

The Chemistry of Collaboration Bare naked fiction and nonfiction writing, editing a hot anthology, making a sexy book trailer, posing for a luscious boudoir session--today at F-stop we'll get a peek at the secrets of all of these creative endeavors as noted writer, editor and blogger Rachel Kramer Bussel stops by for a revealing interview. I know I keep saying this, but those gorgeous boudoir photos make me want to hop the next Jet Blue flight to New York for a session with Laura Boyd. Or maybe I just need a new black satin corset for my collection? Too bad my birthday is six months away.... But don't take my word for it, head on over to F-Stop on this soft summer Sunday and give your eyes a treat!
Posted by Donna at 8:43 AM 2 comments: 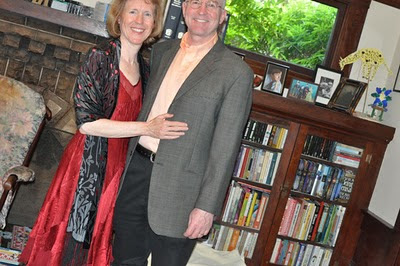 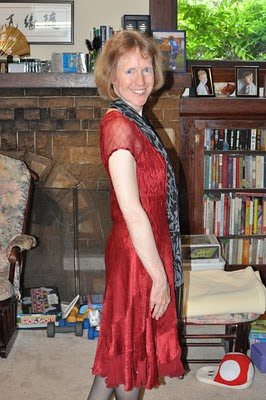 Hope you all had a relaxing "door into summer" holiday!
Posted by Donna at 8:45 AM 16 comments: