As is always true with an RKB story, there is as much to stoke your intellect as your libido. It’s a very arousing story in the carnal sense, of course, but I wanted to quote a part that excited me with its perfect description of an erotica writer’s mind:

“Sex has always been the starting point, never the end, to any inquiry about who I am. It’s the gateway drug to, well, more sex, to finding out more about how I operate, what buttons I like having pushed and which I set permanently to caution. This utterly carnal lifestyle is balanced by the hours-days-weeks-years’ worth of fantasies that must jumble together until I’m compelled to act. I’m not just an ethical slut, I’m a thoughtful one. The time I spend thinking about sex, pondering its every nuance and possibility, far exceeds the time I spend engaging in it, and I’m perfectly happy with that uneven ratio.”

“A First Time for Everything” is the perfect way to end a very strong anthology, and so I’ll end this post with words from the author herself: 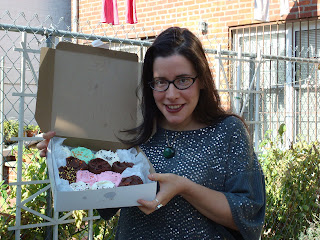 Rachel Kramer Bussel: I like to make my characters (and myself, to some extent) unnerved, thrown off course. In this story, the protagonist thinks she’s so blasé and over everything about sex, but she still has this one big fantasy, and to some extent, is nervous about it. I like the idea that she’s orchestrating it all, but there are still some elements she can’t orchestrate.

There are lots of things that I fantasize about that I doubt I’d ever do, or maybe only if the stars were aligned just so. I like fiction because I can make those stars align.

SB: Did you attend college? If so, which one? What was your major?

I graduated from the University of California, Berkeley, and studied political science and women’s studies. That was back when I was super anti-porn and pretty clueless about a lot of sexual matters in general.

SB: Has your work ever been "made an example of" by various people with an agenda?

I once wrote a column for The Village Voice called “I’m Pro-Choice and I Fuck,” and it was interesting to see the reactions it got from pro-life people. I knew it was a deliberately provocative title, but it was meant to point out the links between sexual and reproductive freedom, because they’re intimately intertwined. Sometimes people have written about my stories or books (or book covers) in ways that I don’t agree with, but that’s okay. One of the hugest writing lessons I’ve had to learn is that once I stop typing, I don’t control how my words get interpreted or used. They become other people’s to do with what they will. It was tough for me not to have the urge to fight (or rather, blog) back, but I realize I have to move on to the next piece of writing rather than wallow in something that’s already done.

SB: Any interesting felonies or misdemeanors you'd like to mention?

The closest I’ve come to that is during my animal rights days as a teenager when I did civil disobedience at a pigeon shoot in Hegins, Pennsylvania. It was a very heady experience, a very us against them environment. I was arrested but wasn’t held for very long, though they wound up releasing me to my friends, who drove me home to New Jersey. My parents, who had been divorced since I was 2, drove together to come get me, and I always say that was when I knew they really, truly loved me, to endure being together in such close quarters for that long!

SB: Do you have any noteworthy hobbies, regimes, pursuits, or collections?

My cupcake blog (http://cupcakestakethecake.blogspot.com) is my little pride and joy. It’s funny because while some people know me for my sex writing, in that world I’m “Rachel from Cupcakes Take the Cake” and it’s very cool. I’ve gotten to meet cupcake people from all over the world and have eaten cupcakes in London, LA, San Francisco, Minneapolis, Atlanta, and Washington, DC in this year alone!
Posted by Donna at 4:39 PM

"I’m not just an ethical slut, I’m a thoughtful one."

What an AWESOME, AWESOME line. Thanks for sharing -- very cute picture too!