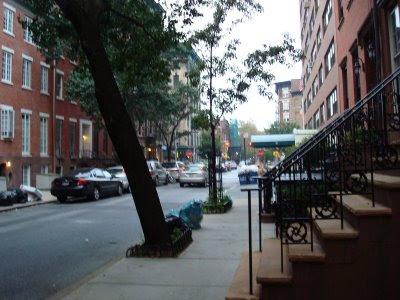 Where did the time go? I’d swear it was just a few days ago that I was in New York City during a lovely stretch of Indian (or should I say “Native American”?) summer weather, finally getting to meet some of my very favorite erotica writers in person and talking dirty in front of groups of strangers to promote my novel, Amorous Woman.

As I start this year’s exciting new “public me” project of assembling the lessons I learned as a rank beginner in book promotion, I realized that my book tours to LA and New York were all about taking myself seriously as a writer—that was the real value and profit (not to mention I had a lot of fun). And so, even though my report is late enough to qualify as memoir rather than reportage, I think it is important to celebrate a wonderfully successful trip and show off my photos of my adventures on my first national book tour.

My journey began before dawn on Monday, October 13. Because of the early flight, I took a van to the airport instead of bumming a ride with my personal assistant and technical advisor—after all, he’d be watching the kids alone all week, at least he deserved his sleep. My van driver had an accent just like Len on “Dancing With the Stars” (I’m fairly decent at identifying dialects/accents and once recognized a man who grew up a few miles from my brother-in-law by his special south Virginia accent) and he was chatty. Since I’ve become a middle-aged lady cum self-promoter, I’m chattier, too, and we ended up talking about the vehicle he was driving. Hey, the conversation was more interesting than you might think. This apparently unremarkable van was once owned by Kelly-Moore paints, but the side door was sticky, so they couldn’t use it on jobs and Len got it cheap. Because he was a fix-it-yourself type, he fiddled with the door only to discover someone had dropped a lighter in the groove and the problem was solved simply by removing it. As I gazed out at the full moon hanging like a golden ornament in the sky, I was amazed to think that everything has a past, a history. Including airport vans. Cool, huh?

This was especially relevant because for me a trip to the east coast is a trip to my past. I grew up in various mid-Atlantic states and the New York area is rich with memories. Add to that the undeniable fact that a trip to NYC is a journey into the fantasyland of writing and publishing. Things are changing, but NYC is still the center of this world. My brain was a little dizzy from the idea I was a published novelist flying to Manhattan for literary events. This was the ultimate in chutzpah, in actually taking myself seriously, even if many consider me just a pornographer hack (my local bookstores topping that list). A little voice still whispered that I was cheating—I was not a real writer—but what the hell, I do fiction, I could pretend!

My plane ride was blessedly uneventful. Tell my why they always delay things for four hours when you have the kids along, but it all goes smoothly when you’re alone with a good book and could wait serenely through countless technical difficulties? I read, appropriately, Rona Jaffe’s The Best of Everything (a 1950s bestseller about young women working in NY publishing) and tried not to think about my own upcoming events and how I might make a fool of myself. The page-turning romantic and professional travails of Jaffe’s many heroines did a good job of distracting me. Of course it was weird traveling without my family, again a kind of reversion to my past in college and grad school, but it seemed right for the professional nature of my trip.

My guidebook had recommended against taking the subway from JFK into Manhattan because it was too confusing, but since my book tour was financed from my modest advance, I couldn’t resist the price tag--$7 versus almost ten times that for a cab, hired car or even a bus. Besides, I’d found my way around a dozen foreign cities alone in my past life. Sometimes it wasn’t pretty, but I got to my destination in the end (like life itself, eh?) Sure enough, there were plenty of signs and plenty of people to follow through the terminal to the monorail, then on to the A-train station. The subway took me right to West 4th Street, just a few blocks from my NYC pied a terre in Greenwich Village, aka my sister and brother-in-law’s apartments. 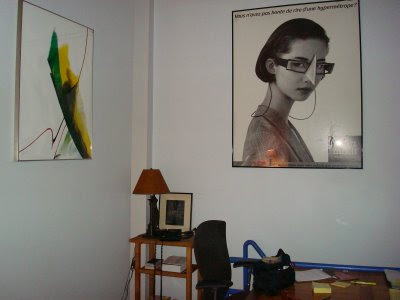 Greenwich Village! Is there any place that oozes more literary history and romance? And that’s literary history of precisely my brand—disreputable, beyond-the-pale degenerate writing about things no polite person would dare speak of. Indeed, during my stay in the Village, I would stay up all night drinking, lunch with fellow writers and discuss how to make the world a better place, and attend scandalous gatherings. But I’m getting ahead of myself.

As I wheeled my suitcase through the West Village Streets, now infused with the butterscotch light of an October setting sun, I could only wonder at the strange path that had brought me here, eleven or so years after I wrote my first short story as an adult. The real thrill was that no agent, editor or publisher had descended from the heavens to lift me to the rank of Real Writer. Whatever had happened was my doing (with the help of wonderful friends and family, of course, but they were as earthbound and real as I was). Hmm, did you ever think walking along a street could be so…profound? Greenwich Village does that to you, I suppose. 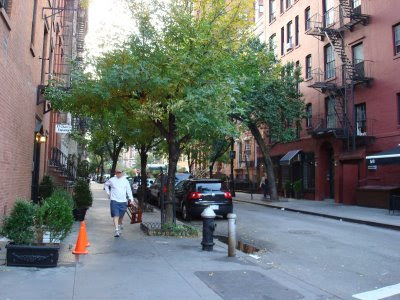 Before I knew it, I was at Charles Street, one of the loveliest streets in the Village. My sister buzzed me into her apartment and we planned the rest of the evening. A trip to Whole Foods for my particular breakfast and lunch needs (yogurt, cottage cheese, Kashi cereal, Nugo Bars), then dinner at Grano Trattoria, owned by my sister’s friend and a sort of “house restaurant.” But first we watched the episode of “Mad Men” I’d missed the evening before—I didn’t want to spend the last evening with my family watching TV! My sister is a fan of the show as well, and it was fitting to watch as I was in the city of “Mad Men,” or at least the city that inspired the story, because later that week we watched the extra documentary on the first season DVD which gave details on how they New York-ified the LA sets (including having lunches at Musso and Frank Grill).

Dinner at Grano was lovely as always—grilled salmon with parsnip and potato puree and broccoli rabe, eased down with two glasses of red wine (one lighter, one heartier and more to my taste). Dessert was a complimentary plate of house-made biscotti, which were tender and tasty. Afterwards, we strolled through the Village and over to Magnolia Bakery, which had been mobbed on my last visit. I knew the cupcakes were over-rated, but wanted to taste one for myself. At 10pm on a Monday, the place was only bustling rather than inundated with “Sex and the City” tourists, so I picked up a vanilla cupcake with a breast cancer ribbon in honor of Samantha, plus a chocolate cupcake for my brother-in-law (rather evocative of breasts in its own way) and took them home in the clever take-out box. 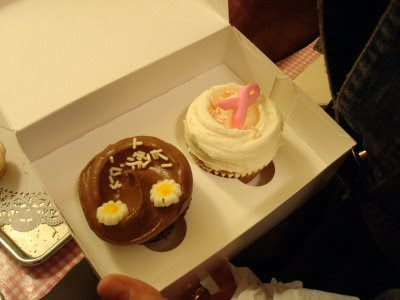 Then I retired to the “guest room,” which was really my brother-in-law’s office. Here my fantasy of being a member of the Greenwich Village literati continued to play out as I could pretend this was my apartment. 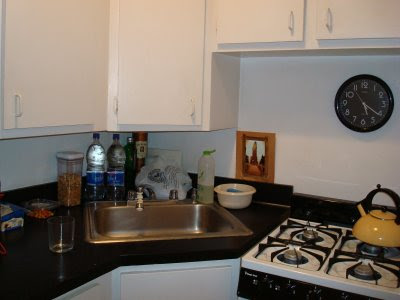 Not that I’d lived in such uncluttered quarters in quite some time (if ever), but it certainly fit with the spare, but tasteful life of the artiste. I’ve scattered photos of my digs throughout this blog—the kitchen where I filled my water glass, the computer where I accessed email, the living room and downstairs “loft” where I slept, except that one night when I didn’t sleep at all. Yes, I’ll tell you all about that soon. 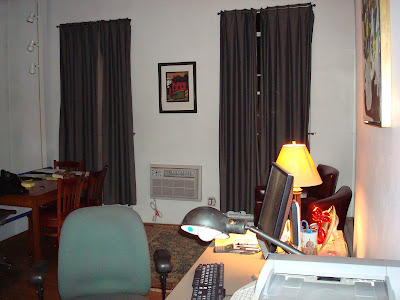 As I snuggled into my futon, I wondered what the week ahead would bring. Tuesday, the next day, would be busy with Japan-related meetings and talks, and of course, I was a bit apprehensive, but I tried to relax and enjoy each present moment of my trip. 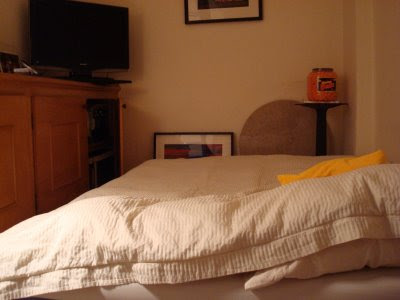 I was in Greenwich Village, a published author, slightly tipsy as all good Greenwich Village authors should be. Although my footprint was gossamer light, I would leave my bit of fairy dust on the history of these streets—or at least help the local bakeries make ends meet.

Coming next: Donna strolls Madison Avenue, talks sex in a fancy lawfirm boardroom, and drinks enough sake to speak in Japanese to real Japanese people.
Posted by Donna at 10:23 AM

You make everything sound so lovely, Donna.

Oh, how I yearn for Native American summer weather. :-)

Thank you for sharing.

Having walked into the middle of your New York adventure, I'm really enjoying catching up on the scenes I missed!

It was sad that I could not make it, but as always, your lovely depiction of the settings puts me right there anyway!

Another fabulous entry in your Guidebook to the Entire World!!!!

What a delightful account! I can hardly wait to read the rest of it, even though for part of it I was there, lol.

Thanks for sharing this! Like Jeremy, I am enjoying hearing (reading) about your trip before I met up with you.

Thanks for taking us on tour with you Donna! You have such a nice way of bringing the experience to life for the rest of us.

Congrats & best of everything with those pesky bookstores. If only bookstores were more like librarians who -- as Susie Bright said during her trip to Portland -- will fight to the death to defend our right to read whatever the fuck we want!

What a fun account of your trip there. I grew up on Lawng Island and lived in the city for about a year after high school. I love NYC. It's like no other place. And yes, The Village does conjure up the whole bohemian life style of writers and artists.

Oh and, I have that same duvet cover! LOL