As Sweet as a SeXy Box of Chocolates 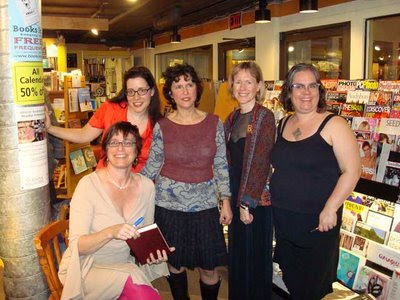 Although I’ve lived in the Bay Area for 23 years, I always feel like a tourist when I go to San Francisco, but in a good way. The city really does have a magic about it, a glow of exotic possibility, sexual, cultural and culinary. Perhaps that’s why Books, Inc. seemed to shimmer with a welcoming golden light as we walked inside and found our way to reading venue set up in a cozy corner of the store. 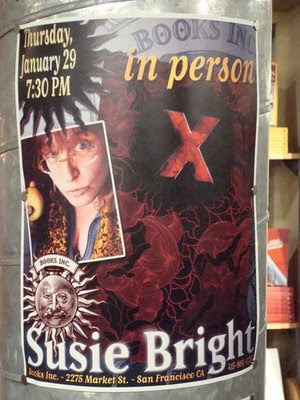 The place had a definite theatrical flavor, from the posters advertising the reading, to the funky stove pipe podium artfully decorated with copies of X—which are lovely and lush enough to serve as eye-pleasing stage props. Again all seats were filled and Susie began her introductions to a standing-room-only crowd. 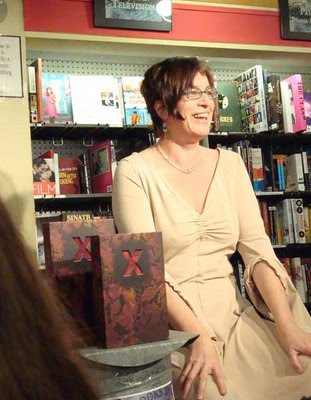 Susie mentioned, with an eye to the advent of February no doubt, that she saw X as a box of chocolates, each story a different bonbon for the reader’s delectation. I’d agree this is an apt comparison. The boundary-testing “Must Bite” by Vicki Hendricks is chipotle-chocolate. My story, “Yes,” would be more like a sea salt caramel with a hint of macadamia brittle—classic with a noticeable crunch of the unusual. Or maybe Tahitian vanilla crème with roasted almond, but let me wipe the drool from my lips and get back on topic here. As I listened to the introduction, it occurred to me that readings, too, are like mixed hand-dipped chocolates in a box. You’re never sure quite what you’ll get, but each has its own character. While Diesel was bright, intellectual and airy, Books, Inc. started off warm and intimate and continued in that flavor throughout.

Next Susie mentioned the passing of the great John Updike, without question one of the twentieth century’s leading American male writers. There is no doubt he was a pioneer of intelligent, poetic writing about sex and has influenced American erotica profoundly. Susie added that she was honored to have included his work in Best American Erotica. To which I’ll add, when I received my contributor’s copy of Best American Erotica 2006, the thrill of holding this dream-come-true book in my hands was only surpassed by the discovery that my story was three pages away from John Updike’s excerpt from Villages. THREE pages—there must be some literary equivalent of six-degrees-of-separation, or perhaps it’s more like almost shaking hands with the Queen?

Okay, I have my feminist issues with some of Updike’s inarguably honest portrayals of twentieth century manhood, but I can't deny that his work has influenced me--and for the good. Couples (the top-selling “family saga” on Amazon now and sold out so it's good I still have my parents' decrepit copy from the 1960s!), the Rabbit books, the hypnotically lovely “Women and Museums,” countless other New Yorker stories and memoirs—I’ve read them all. Coincidentally, last fall I wrote a story about swinging that was a homage to Updike called “John Updike Made Me Do It” which will appear in Jolie du Pre’s Swing! this coming spring. So the talk of Updike’s death was bittersweet—sad of course that he will write no more, but admiring of his truly deathless prose (for most writers that, of course, is a joke, but not for Updike). 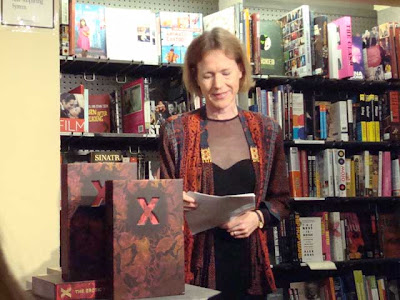 Next came the introductions of the readers and again I went first since it had worked out well enough the last time (note my new "lucky dress" for the new setting). However, there was no microphone, so instead of purring intimately through loudspeakers, I had to dust off my high school thespian auditorium voice and PROJECT. That tended to smooth out the nuances but gave the reading a certain rhythm and passion and maybe even a kind of pride. Standing there belting out dirty words at top volume is pretty liberating, as if I needed any more of that! Because of a longer roster of readers, I left my audience hanging, wondering what the narrator’s Secret Desire might be. Warm applause greeted me after my last line—and what brightens a writer’s heart more? 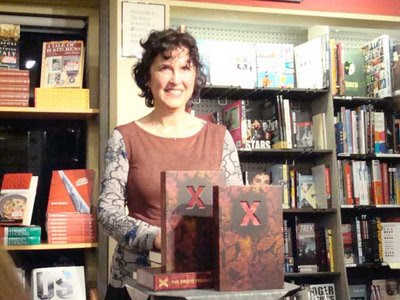 The next reader was Susie Hara, whose witty story of female empowerment, “Puffy Lips,” had delighted me when I first read it. Susie admitted this was her first time to read in a bookstore, but she clearly had a feel for performance (from earlier theatre work I learned later). Hearing Susie read the story aloud was even more of treat—the humor really shone and the audience was laughing and glowing by the sweet conclusion, all of us wishing we could toast the reading with our own Labia Majora cocktail. 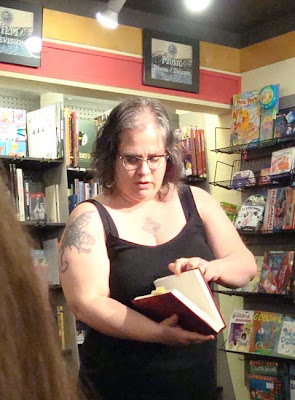 Greta Christina went next with a somewhat shorter reading from “Deprogramming.” Like every good story, repeated readings yield new treasures, although it certainly adds even more to the experience that Greta’s rich voice is perfect for the topic, a troubling, complex tale of the strange roots of sexual desire. Greta mentioned my story and her support of its message—a woman saying “yes” to sex—then mentioned a blog she’d written about how men claim they want women who like sex, but are scared shitless when they meet one. Hear, hear, that observation is alas all too familiar and I think is part of the reason erotica is so threatening to the mainstream. 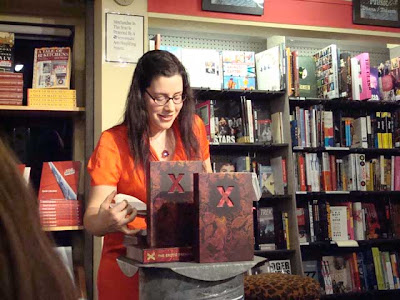 With these images whirling around in my happy little mind, Rachel began to read from her story, “A First Time for Everything,” the account of a woman who arranges her own bukkake party (where a group of men ejaculate on a woman) with the help of a gay male friend. On the page, it’s witty as well as hot, but with Rachel reading and providing the proper intonations, the story shimmered with laughter and sexiness. This was a case of story and voice being a perfect match, the two parts making a greater whole. Live readings are supposedly a dying entertainment, but I’d say any doubters in the audience were converted by hearing “A First Time” in the flesh. Again there were hearty claps of appreciation.

This time there was no question-and-answer period, but the audience was invited to come up and ask questions of us individually and/or get their books signed. Instead of the more formal “walk up to the panel” set-up of Diesel, everyone mingled, chatting as if we were at a friendly party. I’d brought along a few copies of Amorous Woman even though at the last event I hadn’t sold any. Perhaps because I was prepared, perhaps it was something in the air—although no one ever knows why these things happen—but I was suddenly taken over by the same shameless spirit that possessed me at the West Hollywood Book Fair last September. Innocent readers would approach me to sign their book and as I scribbled my note “I hope you find many chances to say ‘yes,’” I asked them if they were interested in Japan because I had my novel with me which is like a trip to Asia for $8, etc, etc. Two nice, intelligent and very cool women actually bought the book (smooch, I love you!) and a few men, no doubt put off by my upfront passion, demurred but took a bookmark. Still, it made me happy to have done something for my baby! 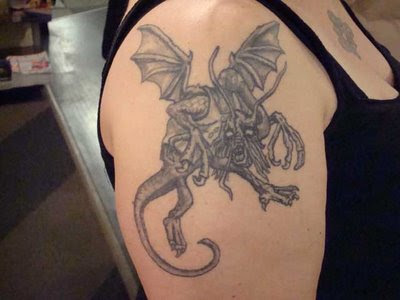 Besides chatting with a good many people with nice things to say about my story, I got to talk with my fellow readers a bit as well. Susie Hara was as warm and funny as her story and I got to ask Greta about her AWESOME tattoo of the Jabberwocky, pictured here. I could spend an hour just staring at the intricacy of this thing—a true work of art requiring patience and endurance from both parties, I’m sure.

Susie Bright was off early this time as she was leaving on a trip at dawn the next day, so we didn’t get a chance to try out her favorite San Francisco watering hole, The Bourbon and the Branch. But my husband and I have it on our date calendar. The bartenders at this former speakeasy will mix custom drinks, and I for one plan to order a Labia Majora. That’s mango juice, a touch of cherry, a touch of orange, soda water, swirls of cream, Grand Marnier and a twist—and we’ll definitely toast Susie Hara and all the authors of X: The Erotic Treasury, a perfect box of chocolates to warm and satisfy on a chilly winter evening.
Posted by Donna at 2:58 PM

Congratulations on another wonderful event!

Thank you for letting me be a fly on the well-described wall once again.

And extra points for projecting!

Donna, reading this just makes me all the more excited about getting to this month's In The Flesh reading for X in NYC - wish you were going to be there (I loved your reading of your column). Do you just have a really good memory or do you take notes? I'd have trouble telling you what I did ten minutes ago. ;-)

Donna, thanks for the photos. Susie really is gorgeous, and so are you.

Thanks, Robin Ero-B! I really wish I could meet you at In the Flesh or rather for dinner at French Roast afterwards with the gang to discuss the reading!

Sometimes I jot down names of cocktails, but in this case the report was fresh from my memory. Fortunately I did take notes for my NYC trip in October.

But hey, we're fiction writers, in a pinch, we can make things up, right ;-).

What a fantastic line-up. And how wonderfully exciting. Yah! Good for you!!

Congrats on a terrific event! And I love the way your gorgeous outfit complements the slipcover.

I also love the sound of slipcover, now that I think about it.

Pours a bedtime brandy & slips under the covers for another peek between the covers...of X.

Looking forward to your podcasts!!!

I'm so glad you had a lovely time, and congratulations on your two book sales!! Yay! Thanks for this account; once again I wish I could have been there in your audience. :)