Hotel Sex Goes to the Movies

Our suite 69 bash is in full swing, and I’ve thoroughly enjoyed our tales so far. Now, in honor of Do Not Disturb: Hotel Sex Stories, edited by Rachel Kramer Bussel, and its provocative trailer, I thought we might discuss the topic of hotel sex in the movies. I expected this subject might be difficult to narrow down to bloggable proportions, but actually I discovered my choices were easy. Although there are plenty of movies with suggestive (or explicit) hotel sex scenes, two in particular epitomize the special magic of hotel eroticism for me.

The first is a classic of American film-making, The Graduate (1967). Coincidentally, I just happen to have finished a fascinating book called Pictures at a Revolution: Five Movies and the Birth of the New Hollywood by Mark Harris. Harris discusses the making of the best picture nominees for 1967: Bonnie and Clyde, The Graduate, Guess Who’s Coming to Dinner, In the Heat of the Night, and Doctor Doolittle. The last movie was an absurdly expensive turkey, the rest did indeed represent some aspect of a shift in American film in the mid twentieth century. Although some of the book dragged for me, especially the deals of the excruciating road to production, once the casting started, I was enthralled.

And of course, don’t we all love those little behind-the-scenes tidbits such as the fact that Katharine Ross damaged Dustin Hoffman’s eardrum during the multiple takes of the scene where she slaps him in the Berkeley boarding house? Apparently she wasn’t slapping hard enough and director Mike Nichols had to goad her along. Hoffman later discovered the reason his ear was stinging when he slipped under water in his scuba-diving gear and felt his head explode. When he got out of the water, blood was pouring from his ear.

And then there was the eye-opening insight about Nichols’ initially unacknowledged personal investment in the movie. His choice of Dustin Hoffman as Benjamin was a mystery to all, even himself, in spite of the actor’s outstanding screen test, which showed a brilliance that did not reveal itself until the film was developed. The Benjamin in the novel was a blond WASP, meant for the likes of Robert Redford.

“My unconscious was making this movie,” [Nichols said]. “It took me years before I got what I had been doing all along—that I was turning Benjamin into a Jew…Who was the Jew among the goyim? And who was forever a visitor in a strange land? […] Part of me knew what I was doing in terms of the outsider and so forth, but another part of me, a part that I had no inkling of, must have known that I would never get material so suited to me again.” (PAR, p. 319-320) By the way, Nichols also directed Carnal Knowledge, which makes my top ten favorite movie list.

But, of course, we can’t forget those wonderful scenes at the “Taft Hotel” actually filmed at The Ambassador in LA, which was soon to be demolished. Did you know that there was a deliberate attempt to dress Mrs. Robinson in animal skin patterns to highlight her predatory nature? Or that Hoffman and Bancroft had to spend days in bed filming the scene where Benjamin attempts to talk to Mrs. Robinson before they have sex?

Perhaps it is best just to close our eyes and remember the scenes in the hotel room. Mrs. Robinson dressing as Benjamin lies in bed staring blankly. The time he kisses her when her lungs are full of cigarette smoke. The hilariously uncomfortable scene in the hotel bar where he can’t wave down a waiter, but she manages it with a snap of her fingers. 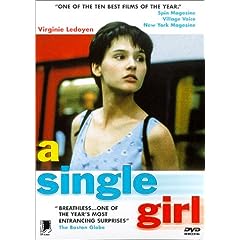 But there’s another film that epitomizes hotel eroticism to me, this one a rather obscure French film, Benoît Jacquot’s La Fille seule (A Single Girl, 1996). Since I discovered Ingmar Bergman in eighth grade, I’ve been a fan of foreign films. I love how they subvert my Hollywood expectations, how they trick my eye and best of all, how they make me think about film-making and life itself as art. La Fille Seule is cinema verité, filmed with a hand-held camera, defiantly undramatic. For most of the movie, you watch Virginie Ledoyen’s shapely derriere as she walks down the corridor of a Parisian four-star hotel delivering café au lait and baguettes to the guests. Naturally, she walks in on some interesting scenes. A “small” film ala French New Wave that is now out of print with its distributor, it’s a movie that’s never left me since I saw it about ten years ago. Here's a Youtube clip:

It took some doing to find it again and I have to credit Herr Doktor with discovering the winning key words for Google: French movie, hotel worker, handheld. Now he finally can receive his own Amorous Woman bra and panty set as his fitting reward!

But enough about me. Do you have favorite hotel sex scenes from the movies? While we’re sharing, help yourself to cocktails from the Taft Hotel and baguettes with sweet butter, plum confiture, and café au lait from Paris….
Posted by Donna at 8:18 AM

Ralph (pronounced Raiff) Fiennes (swoon!)and Kirstin Scott Thomas' lust-driven affair in The English Patient: There were many heated sex scenes between these two throughout the film, but I seem to remember a pretty hot scene in a bathtub in a hotel room, located in Cairo (?).

Let's face it though, anything and everything Ralph does oozes sex, sex, sex.

I agree with you on Ralph Fiennes, Neve! He's sizzlin'. That pair also did something secret at naughty at a party, but that's not a hotel, so we can't speak of it here!

I'll have to muse over this question a bit more. There some pretty hot hotel sex in "The Lover" about a french girl in, I believe it was Vietnam, with an older Chinese man. Actually, there was just some good sex in general in that movie!

I loved The Graduate. '67 was a great year for movies, eh?

I also wanted to chime in with a hear, hear for foreign films in general. As you say, I like how they deflect from the Hollywood ideal, and can surprise me.

Oooh, The Lover is one of the sexiest movies ever! I'm not sure, but I think most of the love scenes take place in the rich Chinese guy's bachelor pad in the city, which is specifically intended for trysts with mistresses. But to my mind, that's even sexier than any old hotel.

Thanks for the reminder, Craig. I'm going to have to pull out my DVD and travel off to Vietnam....

You're right, Donna, most of it was in his place in the city.

I recall one scene where he meets her family and is confronted by her brother. The scene ends with some particularly angry, grubby sex in a hotel room. It's been a few years since I've seen it, though. Not sure if I'm remembering right, though.

I envy you having a copy on DVD!

Rachel has created another excellent book trailer! "Funky Black Chick" AKA Twanna Hines is in the video. I'm hoping to post an interview of her at the Swing! website.

Speaking of hotel sex, Tawanna Sullivan, an author in Swing! has excellent F/F hotel sex descriptions in her story.

Yes, Craig, that may be. I'll check when I watch it again. I remember a dinner in a restaurant with her family where he was paying and they were rudely wolfing down the food without speaking to him. It was one of the most excruciating scenes in a movie, outside of literal torture.