The legendary author, editor, activist and sexual provocateur Susie Bright joins us from Santa Cruz, California to celebrate her beautiful new hardcover anthology X: The Erotic Treasury (Chronicle Books), which includes a story set at In The Flesh which you will hear! Joining Susie will be contributors Paula Bomer, Ernie Conrick, Martha Garvey, Nicholas Kaufmann, Tsaurah Litzky, Marcelle Manhattan, Lisa Montanarelli, Chelsea Summers and host/curator Rachel Kramer Bussel (Best Sex Writing 2008, Spanked). Special guest Maxim Jakubowski, editor of the Mammoth Book of Best New Erotica, also joins us from London. Note special start time (for February only): 7:30 pm. Doors open at 7. Arriving early is highly recommended. Books will be available for sale by Mobile Libris. There will be a Q&A with Susie and book signing after the reading.

I wish I could make it, although I’m expecting the place will be so packed, it’ll be like the Gion Festival in Kyoto where I was wedged in the crowd so tightly, my feet weren’t touching the ground, but I was still moving (a simultaneously exhilarating and terrifying experience).

One of the main reasons I wish I could be there is to meet up with the wonderful Martha Garvey again. Martha was one of the first people ever to write me a nice note about one of my stories—“The Cunt Book” when it appeared in Clean Sheets. Martha’s poignant and lovely story “Bottle” (which later appeared in Best American Erotica) was also up around the same time, and I was so flattered to earn the praise of such an accomplished writer, my feet didn’t touch the ground for days (and it wasn’t even the Gion Festival). Martha also paid me the great honor of coming to my Kinokuniya reading last October which I’ll discuss in my next installment of my New York City Book Tour Diary—coming soon! And, last but not least, she has a story in X called “Night Train," which is hot and gritty and very New York. A woman buzzed on lattes meets a younger tattooed stud and there’s chemistry aplenty beyond the caffeine. However, he refuses to give her his last name, so she refuses to take him home. But he comes up with an alternate arrangement for a memorable evening—and a trademark MG memorable story. 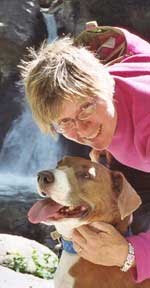 Here’s Martha’s interview for X about all the things she does besides write world-class erotica--with a little of that thrown in, too.

Susie Bright: Have you received any awards or condemnations in your career as a writer?

Martha Garvey: My short story about having sex with John Quincy Adams ("How to Fuck a President So It Means Something") won 1st prize in Clean Sheets’ Sex and Politics contest.

I have published two books about pet health, My Fat Dog and My Fat Cat: 10 Simple Steps to Help Your Pet Lose Weight.

Do you have a scandalous or noteworthy theater life?

Yes. My one-woman show about my mother’s obsession with the actor Brian Dennehy called “My Mother’s Imaginary Husband,” was at the Knitting Factory.

I have also worked as a literary manager and dramaturg, and once worked on play reading that featured David Strathairn and Kevin Bacon…so I am one degree away, baby.
Posted by Donna at 8:33 PM

Indeed, it seems as though it will be an extraordinary evening.

And how interesting...my cat is a bit overweight and has been for a few years now, despite my changing his food intake amount and brand a number of times. (This is so not something I ever thought I would talk about on your blog, lol.) Thanks for the info! :)

Yes, well, Emerald, life can hand us some serendipitous surprises. The books are selling well on Amazon!

Well, I plan on going to this event in NYC, so if you don't hear from me afterwards just assume I was squished!

Oh, and I have a fat cat too - maybe I should check out this book. Doesn't help that I have two other not-fat cats.

Do give us a report, Robin, if you return intact! I really wish I could meet you there, but we'd probably just be shouting at each other over the crowd noise.

And I didn't realize I'd be helping with the chubby cat problem--maybe cut back on high fructose corn syrup and transfat ;-)?