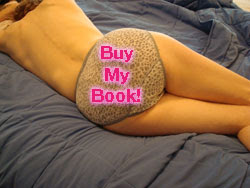 Maybe you've noticed--and good for you, if you haven't--but I've been on a break from blogging for the past few weeks. Initially, I thought it was because I was busy with Thanksgiving preparations, story writing, and other things involved in my day job as family manager. But gradually I began to realize my reluctance to surf the waves of blogland is coming from within.

In my final installment for my "Shameless Self-Promotion" column over at ERWA, I talk about when is the right time to stop promoting. For a long time I suspected on an intellectual level it was time to let Amorous Woman go, but I couldn't do it. Now my body and mind are making that decision for me. I physically cannot make myself do the things I spent most of two years doing as a fake eager book promoter, so yep, it's clearly time to wiggle out of those "buy my book" leopard panties and put on some sober white cotton briefs. Last year at this time, I hoped to make good progress on my next novel in 2009. One year later, I realize I've done next to nothing. I have blogged a lot, though, and it's become obvious to me that I'm using the same energy I need for my own fiction here instead.

Now, I have to say that being part of the erotica bloggers' community has brought wonderful rewards. I've connected with other generous and talented writers all over the country and the world who've supported me and inspired me with their thoughtful and lovely blog posts. I'm not saying I'll give up blogging forever, but I do plan to cut way down and focus on my fiction in the coming year. In the meantime, I may finish up my posts about my summer vacation, just 'cause I'm the type who likes to finish things I start sooner or later (then again, maybe I won't and that's okay, because who's grading me on this, right?). Beyond that, I think I need the rest of December to step back and take stock of where I focus my creative efforts. This is actually rather painful for me to give up being part of this wonderful community even for a month, but I think it's necessary to step back and get a fresh perspective on my writing life.

No need to say good-bye, though, just bon voyage until the new year. Feel free to keep in touch by email, and have a fun winter solstice holiday season!
Posted by Donna at 2:08 PM

awwww...i was already curious what the reason is why you didnt blogged in a while here...

i hope that winter break will not be too long...

I understand where you're coming from, Donna. I've been learning in my own way recently that we need to focus our energy on what counts most.

Have a great holiday!

Enjoy the break, and happy writing!

Love and miss you, but I know I am in your thoughts, like you're in mine. Happy Writing. Happy Holidays. Happy Birthday! (coming soon).

Hi Donna, I will miss your interesting, intelligent, provocative posts and hope we'll hear from you soon! It's easy to get sidetracked on here and I hope you'll share your thoughts and what you're working on from time to time.

Good for you. Take all the time you need, dive deep within. I'll look forward to finding out what your next steps are.

Love you , Donna! I hope you have a lovely break with lots of adventures, culinary & otherwise.