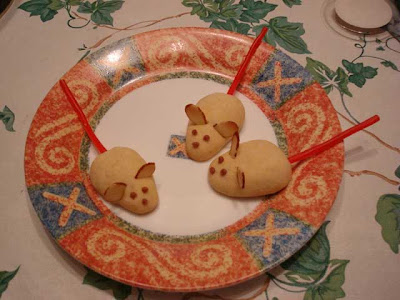 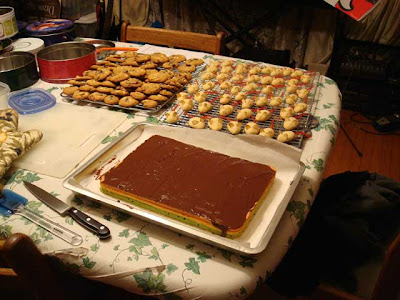 Here's a photo of my dining room table on Tuesday night, the height of the frenzy. The chocolate-covered slab will soon be cut into tiny, jewel-like squares to make the Venetians, everyone's favorite cookie. Only a crazy person would labor over the almond-paste dough lightened with whipped egg white, divide it carefully into thirds, tint two, bake the thin layers for 12 minutes each, agonize over whether they'd fall apart, layer them with apricot jam, let them rest in the refrigerator over night and finally ice them with melted semisweet chocolate. This year they turned out well because I took them out of the fridge well before I poured the chocolate and was too busy to attend to them sooner. That meant the cookies were room temperature and the chocolate took longer to harder, so the icing didn't crack as much as usual and they were much easier to cut. So, crazy overscheduled busyness can lead to fruitful discoveries. Next time, I'll make the same "mistake"! 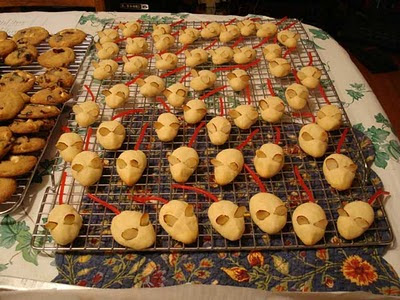 This year I tried two new recipes for the boxes and rehearsed one other for possible future inclusion. The latter was a recipe for "Nutmeg Logs" which were quite nice--a rum and nutmeg-flavored sugar cookie rope, rolled in sugar for crunch and frosted with an eggnog buttercream. The big hit, though, were my "Night Before Christmas Mice" cookies, seen here cooling on the rack. Herr Doktor entitled this photo "many blind mice." I like that.

Because a number of my son's teachers have kids, I thought the mice would be a nice whimsical addition this year. They turned out to be quite a headache, too. To get the string licorice tail in there, I had to shove a wooden skewer in each of the fifty mouse bottoms, which felt rather like something I should be describing in an erotica story. The eyes and nose were a challenge, too, because the recipe recommended melted semisweet chocolate, but that was leaving a weird point of melted chocolate and made the mice look crazed. So I whipped up some buttercream, which also didn't work until I used a smaller tip on the pastry bag.

I realized, as I was tearing my hair out over these damned mice, that my cookie-baking orgy is very much like writing for me. I have to face down my fears and my perfectionism with every recipe. Disaster lurks at every corner, even though I've been doing cookie boxes for five years and baking some of the recipes for many more. And yet the compliments and enjoyment of those select appreciative recipients (the very appreciative ones get boxes year after year--no dieters or people who "forget" and still have some left over weeks later, please--plus my family is very well-trained in expressing ecstatic delight) makes all the suffering worthwhile. 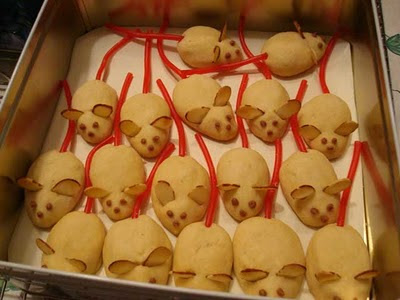 Here is a squad of mice destined for my son's class holiday party. Each one has its own personality, doesn't it? Unfortunately, none returned to tell the tale. I'm not sure if I'll do the mice next year. They've gotten good reviews, but several people have said they're too cute to eat. What do you think? I mean now that I have the butt-skewering and the eye/nose recipe down, maybe it won't be so trying next year? 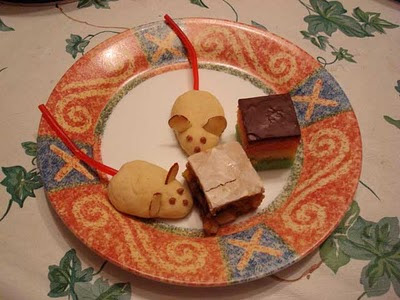 This pair did escape the jaws of the fifth graders and seems to be sniffing at the other new recipe--filled German Lebkuchen (gingerbread) squares. The filling of apricot jam with chopped almonds and candied European orange and lemon peel moistens the gingerbread nicely and I will definitely be making these again next year. Especially since I can make them in November and have one recipe out of the way. 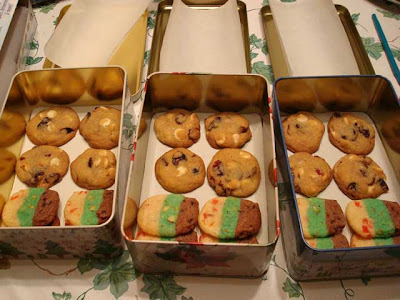 The photo above is of the bottom layer of the teachers' boxes, including classic Ribbon Cookies and Cranberry-White Chocolate Drop Cookies. 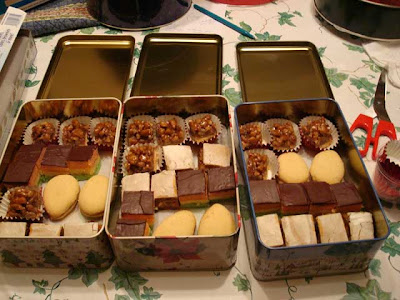 The top layer includes the heavy hitters: Pecan Caramel Cookies (a pecan pie like topping on shortbread crust), the aforementioned Lebkuchen, Venetians and Spoon Cookies (made with browned butter and Tahitian vanilla for a melting texture and sandwiched around raspberry jam). 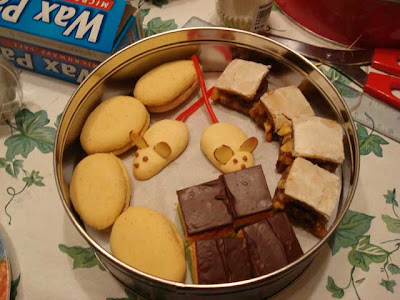 If you have children or are a child at heart, you also get a couple of the frisky little mice.

Still left on the schedule--the gingerbread house which I'll make with a new recipe, an attempt at my mother's classic coconut macaroons and some Cranberry Pistachio Mexican Wedding Cookies for a friend who is receiving a late box. I wouldn't feel right if the gift didn't have at least one cookie fresh from the oven!

Perfectionism. Nutty, yes, but where would I be without it?
Posted by Donna at 9:32 AM

the mice, blind crazed or not look wonderful and delicious..totally would become a cat and chase down mice your dinning room..:-)

so thank you for sharing your extray ordinary cookie-madness...:-)
i hope for more to come..:-)

Not that anyone would doubt it, but they do taste as good as they look, hmm, maybe better.

Your baking is as creative and talented as your writing and I'm looking forward to sampling more of both.

You're welcome to help with our rodent problem, Danielle. And the mice don't run all that fast either ;-).

And thank you, Herr Doktor. If I didn't know better, I'd guess you were angling for some more cookies next year?

Oh, Donna, everything looks yummy! This is my weekend for cookies - will start tomorrow, and just get done what I can - things are still crazy here! Thanks for the delicious post. We'll have to get caught up soon!
Have a wonderful holiday!

Hey, Marina, best wishes for a sweet holiday to you! If you're up for sharing, let us know how your cookies turn out. I always have an eye out for new recipes....

Hot damn! Those just look delicious (as always.) Love them all, but I'm kind of partial to those mice!

This year we've been doing a lot around the house, and so we're juggling. Cooking a batch at a time, mostly just favorites.

Oh wow, I want to teach your kids :D.

A batch at a time is a much more sane way to go about it, Craig, but with this "before school vacation" deadline, and my freshness thing, it's become a real to-do. I'd love to try some of your family favorites!

And Justine, well, I'm sure you could teach my kids many, many things ;-).

You've created a masterpiece. Truly. I love the mice - they're very fun and I'm sure each bit of the little devils are heavenly.

Thank you for sharing. It's always nice to get a little peek into your corner of the world. :-)

Dannielle sent me this: WOW! you're a cookie baking goddess.

Good lord those look delicious. My mouth is seriously watering.

And this,
"I had to shove a wooden skewer in each of the fifty mouse bottoms, which felt rather like something I should be describing in an erotica story"

Thank you for sharing! It looks like quite an amazing process, and (to me) inspiring as such. Enjoy both the cookies and the appreciation, and don't forget to heap it on yourself as well! ;)

Hey, Jo, welcome and have a cookie! There is a dark side to the goddess, but I won't deny I love the compliments, lol.

Yes, Emerald, believe me, my own giggling as I poked bottoms got me through a sensitive task. You have to get the right angle or the poor mouse has a skewer emerging from back or belly instead of a clean internal penetration. I got pretty good by the end though. A real cocksman!

Stupendous Donna!!! I'm so glad you've stepped back in to show us these and bring us other good news of the season.

Very Happy Holidays to you and yours, and how could you miss with those delicious and delightful cookies! Mmmm...

Happy Holidays to you, too, Isabel. We'll be having some pannetone drenched in Italian dessert wine on Christmas morning. I'll be thinking of you (burp).

Ho-Ho-Ho! Drenching Panetone in dessert wine for breakfast why didn't I think of that!!!!