More About Intercourse (and Food, Too) 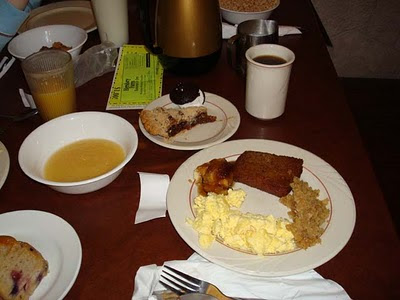 So, there are a few more memories of Amish Country that I'd like to share before I buckle down to my new project for 2010. (By the way, I'm inviting you all to give me a spanking if I don't keep my promise to make progress on my second novel in the coming year). 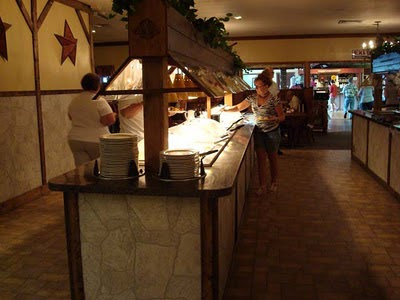 Let's start with the buffets at the Hershey Farm Inn, where I had an epiphany about my culinary past. I have mixed feelings about buffets, because the quality of food is never the best, but you do get to taste little dabs of things you otherwise wouldn't order. I hear Miller's is the place for the best food in Pennsylvania Dutch country--it's also a buffet as are most restaurants--but we didn't get there on this visit. Our own meals at the breakfast and dinner buffets of our motel was more than just sustenance for a hungry tourist. As I strolled up and down the steam table line at dinner and wandered over to the dessert bar, I saw many familiar foods from childhood: chicken pot pie, red beet eggs, slices of cantaloupe otherwise known as "lopes," vats of applesauce and rice pudding in the "real food" area, gravy of all kinds, green beans boiled to death in ham broth. Breakfast was even more of a time warp: scrapple (pork scraps molded into a loaf), creamed chipped beef, blueberry pancakes, very wet sticky buns, plus shoo-fly pie and apple dumplings, cause you have to have dessert at breakfast! I remembered then that my mother called herself a "Pennsylvania Dutch cook," which I didn't really believe at the time. I mean, she didn't wear an Amish cap in the kitchen or anything like that. But now I see she was right. For us, a freshly baked apple dumpling in a bowl with some milk poured over was considered a fine breakfast, almost scandalous in these days of oat bran and fat-free Greek yogurt.

As you see from my plate above, I indulged in a number of local dishes for breakfast, including baked oatmeal (a very sweet dish) and the house shoo-fly pie. I was a bit disappointed in the latter, wondering perhaps if I wasn't fondly remembering "dry" shoo-fly pie rather than the "wet" bottomed version. But more on this below. 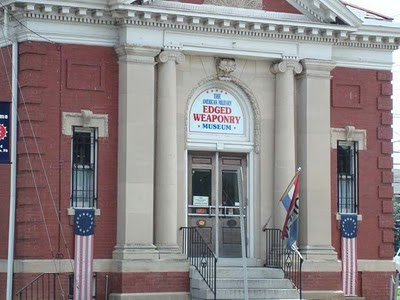 After a morning at the Christmas Center, we took a leisurely path to Intercourse, the rhetorical high point of our vacation. My son noticed that the town boasted an "Edged Weaponry Museum," swords and other phallic symbols, which seemed eminently appropriate . I wandered down to the building to snap a photo, dressed in khaki shorts and big California shades, and as I returned to my family waiting at the pretzel shop, a buggy full of Amish children passed me. Every one of the small faces turned to stare at me in sick fascination, a strange creature baring her spindly, white legs, with insect-like brown plastic discs over her eyes. This struck me as appropriate, too, that the Amish should return the relentless touristic gaze with such naked curiosity. 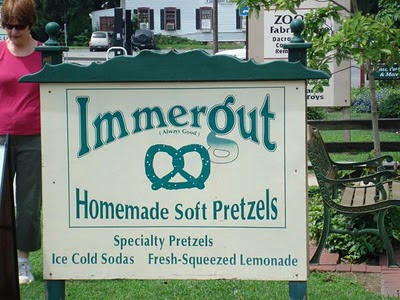 But let's get back to food again. The fragrance wafting from Immergut Pretzels was irresistible to all four of us, inveterate soft pretzel lovers that we are. And Immergut (meaning, I believe "always good" in German) was really excellent! Herr Doktor and I ordered a whole wheat version to share, and it was baked fresh for us. Believe me, nothing is as yummy as a piping hot, slightly sour whole wheat soft pretzel. If you find yourself in Intercourse, do order this treat from one of the porcelain-skinned Amish lasses at the counter, who'll twist you up a fresh one with impressive skill. 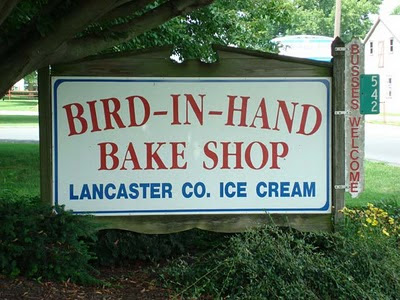 We continued on to the T-shirt shop, as I mentioned yesterday, plopped down a wad of cash for a huge bag of suggestive souvenirs, and then found ourselves hungry again for some more carbohydrates, because, hey, they do carbs very, very well in this part of the world. Shoo-fly pie bakeries abound, but I was intrigued by the description of the Bird-in-Hand Bake Shop in my guidebook. Perhaps the name "Bird-in-Hand" would seem perfectly innocent in another context, but after stops in Blue Ball and Intercourse, it inspired equally obscene images for me. I'm sure I don't have to elaborate for readers of this blog.... 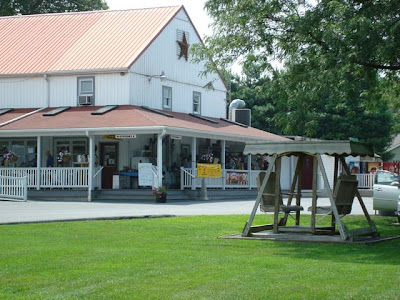 Anyway, this bake shop is off the beaten track a bit, a few minutes drive along winding country roads from the highway. In fact, you really feel like you've gone back in time--to my own childhood and beyond. The presentation of the baked goods was marred a bit by all the Saran Wrap, but our libidinous appetite for sweets helped us overlook all that and we gathered an impressive selection of local specialties: a slice of shoo-fly pie, a huge apple dumpling, and a bag of snickerdoodles. 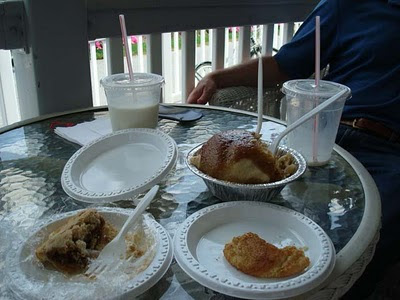 My younger son focused on the cookies, which were very authentic, and I felt a special bond to the apple dumpling, but the real star of the show was the shoo-fly pie. I realized that this was what I'd been looking for, and what the gloppy version at the Hershey Farm Inn buffet had not offered my nostalgic taste buds. The Bird-in-Hand Bake Shop version (warning: there's a "Bird-in-Hand Bakery" on the main road I did not try) is simply a dream: flaky crust, seductive struesel and a miraculously light and flavorful molasses filling. This pie would rival any of the world's great desserts--or at least that's how I felt as I savored each heavenly bite. And it's delicious even when you eat it with a plastic fork! This is the shoo-fly pie to try. 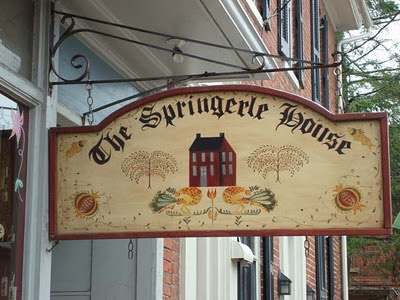 You'll be relieved to know we had a saintly salad for dinner, but we still managed a stop at The Springerle House in nearby Strasburg. (As I mentioned before, the scene in Witness where Harrison Ford punches out the taunting tourist was filmed near where we parked.) 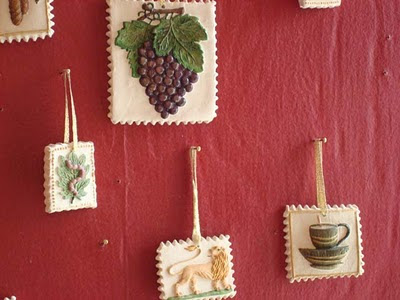 Springerle are molded German Christmas cookies, and I went to the shop more to appreciate the artful molds than to sample the fairly bland anise or vanilla flavored sugar cookies--although I did that, too. The shop also sells Christmas decorations shaped from Springerle molds and painted in pretty colors, and indeed a souvenir hangs on my tree as I write this. 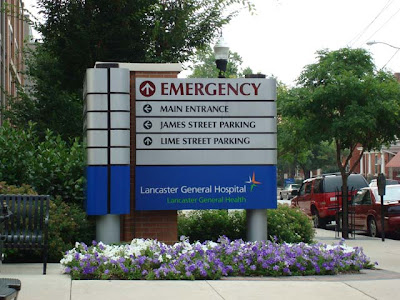 That evening, we decided to drive past the hospital where I was born, forty-eight years ago tomorrow. In just a few minutes, the scenery slipped from our nation's rural nineteenth-century past, fragrant with manure, to all-t00-contemporary neon-lit strip malls, then back again to the early-twentieth-century charm of the city of Lancaster itself. Lancaster General Hospital had obviously been renovated since I made my way out of the womb and into the world--named by the doctor who preferred "Donna" to my mother's other choice, "Yvonne." By the way, the guy also admired my pink butt. Fortunately times have changed in the delivery room and newborn girls are spared premature sexualization. But I made a strange and fascinating discovery on this trip--my birthplace is situated on a street which shares a name with my husband! Makes you believe in fate, doesn't it? I mean, who would have ever thought I'd marry a guy named "Lime"? Or is it "Main"? Honey, what was your name again? 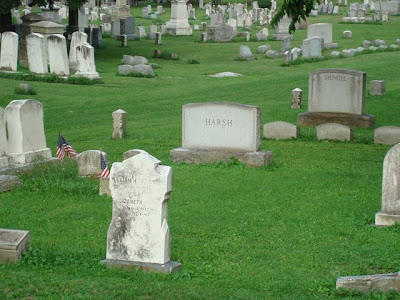 Anyway, my main man also pointed out that the hospital is conveniently located across the street from a cemetery, for easy disposal of any mistakes. Yes, it's a "harsh" world, even in charming Lancaster.

Next time--spying and eating in our nation's capital!
Posted by Donna at 10:41 AM

I can't believe you forgot my name. Guess it is just too common

Oh, dear 14th Ave, I am so sorry. And after all these years together. I was having a senior moment, I guess ;-).

ha..lovely..again i feel like i just were there, peeking over your shoulder..and indeed immergut means always good...:-)

and thanks to the pink butt admiring man who prefered donna to yvonne..i m in team...and..we all...admire your pink behind:-)

LOL. So what if you can't remember which street your partner's name lives on? The important thing is having someone who's up your alley.

I love soft pretzels and have been known to experience quite a thrill when I find one available in whole wheat.

I like what you said about the gaze of the Amish. It struck me as insightful and nicely stated. :)

I'm rather behind on your blog due to travel and holiday plans but am slowly catching up (backwards, haha). Thank you for this charming description of countryside and food!

Thanks, Danielle. I will admit the admiration of my rear has been a lifelong theme, but perhaps merely by default? I think "Donna George Storey" sounds more poetic than "Yvonne George Storey," so I guess that makes three of us!

Yes, Jeremy, having a spouse up one's alley is definitely key. There are a lot of alleys in that part of the world, too. I'd come to think it was merely a rhetorical device....

Hey, Emerald, I hereby declare a moratorium on bloggish obligations, but I'm with you on whole wheat soft pretzels. Am besten!

seems like that..totally...:-)
allready as a kid i was fond of charakters in books and movies whos name were donna and ashley..always liked them..:-)

and forgotten the other night...all the bets wishes for today and happyness and all..:-)

Yvonne Parking can be your "undercover" name.

(Hmm ... I guess this means my forty-eighth b'day will be officially starting its gestation.)

Thank you, everyone! I'm recovering from my Taittinger hangover right now, lol.

I like Yvonne Parker as a nom de plum for the stories I don't want to totally own, like if they don't have any sex in them or something....