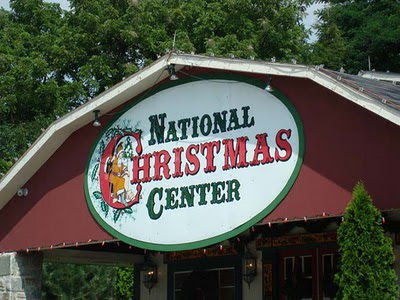 Sometimes putting things off for a looong time can have fortunate results. For example, I stopped my travelblog about my summer vacation right before I got to the part about the National Christmas Center in Paradise, PA. If I'd been a dutiful girl, I would have shown you my pictures of this Christmas museum back in September. But because I was "bad" and took a lengthy break, I can show you my pictures on Little Christmas, just on the brink of Christmas Eve, when everyone is really in the mood. By the way, "Little Christmas" is the Swiss name for December 23 and apparently you are supposed to invite friends over and eat lots of Christmas cookies on this day. I plan to eat a few extra tonight in honor of that venerable Swiss custom.

I'd read about the National Christmas Center in the December issue of Victoria magazine a few years ago, and when we decided to go to Amish Country, I knew I'd have to drag my family there. I'm sure the place is crowded at this time of year, but back in August, we were pretty much the only people there. The outside is unassuming, a bland, white rectangle of a building. Inside, however, the lights of Christmas blaze their magic into a perpetual wintry twilight. The Christmas museum is the sort of place I dreamed of having in my basement as a child, Aladdin's cave filled with every Christmas present I wanted but never got. Sure, it's a bit more Disneyland than museum, while at the same time it also has that Germanic (over)abundance of carefully catalogued evidence displayed everywhere. (The Santa-themed tobacco ads were especially creepy). But I really enjoyed it, and now, as real Christmas draws near, I still remember wandering its paths and yielding to its charms with a hush of wonder.

The first tableau to greet the visitor is a Christmas parlor where Virginia of "Yes, Virginia, there is a Santa Claus" pens her famous letter. The reply of the editor of the New York Sun from 1897 is reprinted, and I copied down this part which spoke to my fiction writer's heart: "The most real things in the world are those that neither children nor men can see." Or women either. That, Charlie Brown, is really what the solstice festivals are all about. 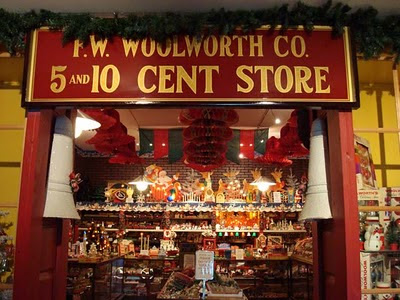 The next highlight was the 1950's Woolworth's Christmas display, which was a whole room full of vintage Christmas decorations and gift wrap set up in a mock store you can walk right into. Many of it was still familiar to my eyes from my 1960s childhood, the candle figurines and toys, the styles of Christmas ornaments. There may have been a surveillance camera hidden among the stuff, but it felt like I was all alone and able to get intimate with these things, that I could actually browse and buy them once the ghostly clerk returned to man his ancient cash register. However, I settled for second best--a few irreverent photos to preserve my memories! 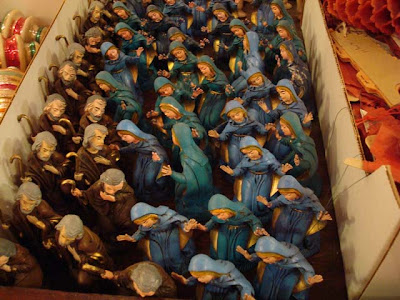 For some reason this crowd of Josephs and Marys made me laugh, perpetually posed in adoration of something that isn't there. Or maybe they're shocked by a spider or something? 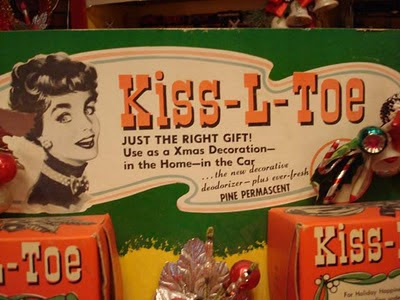 I also liked the Kiss-L-Toe and would have bought some for my home and both cars, if I could have. 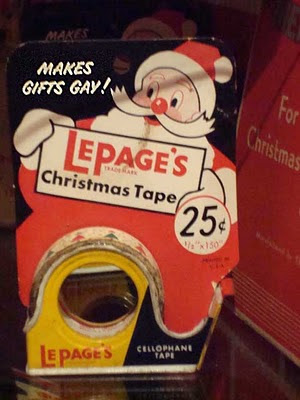 This magical tape claims to make gifts gay. Might it make you gay, too, if you wrap it around certain body parts? It might be an experiment worth trying.... 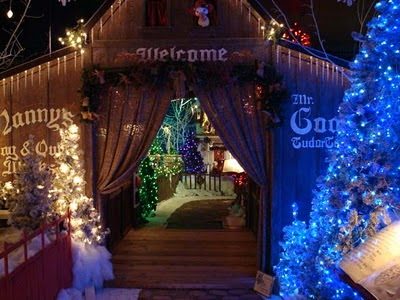 I lingered at Woolworth's, so long my family went on far ahead, so I traveled the rest of the museum alone, indulging myself in my own return to childhood. There was a section on Christmas around the world, a visit to a lush, toy-crammed North Pole, and a trip through Tasha Tudor's story about Christmas critters waiting for Santa Claus, which took you along a winding path through a forest of glittering Christmas trees. Perhaps it was because I was all by myself, but I really felt I was on a mysterious journey into the darkness. Maybe that's what childhood is all about? 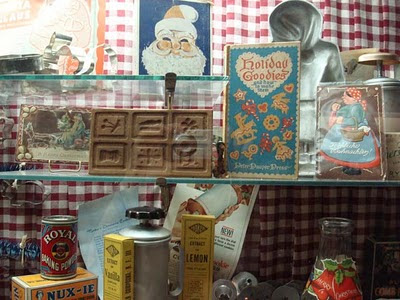 After the fanciful magic comes more serious, if no less pretty displays on the history of Christmas in Pennsylvania. Of course, I was drawn to the Christmas baking exhibit. 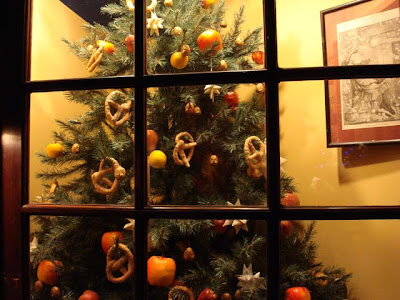 And did you know that Lancaster County has the earliest documented Christmas tree in the US? 1821 was when the county where I was born enjoyed this custom. I liked this local Christmas wish: "I wish you a Merry Christmas and a happy New Year, a pretzel as big as a barn door and a sausage as thick as a stovepipe." In fact pretzels were a popular Christmas ornament in these parts. And sausages, well, erotica writers definitely need especially thick ones to sustain themselves through a long year of tale-spinning.

Well, that's all for Christmas in Paradise. My plan is to finish up the last few installments of my travel report this year, and my next topic is a seamless segway into pretzels and the food of Pennsylvania Dutch country. Now I'm off to assemble this year's gingerbread house, a new recipe made with anise, cardamom and honey that fills my dining room with the most luscious fragrance.

Happy Little Christmas and eat lots of cookies--it's required!
Posted by Donna at 11:51 AM