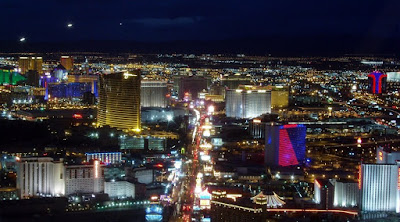 Susan DiPlacido is one cool writer in every sense of the word. Her work is smart, down-to-earth, humorous, and generous, just like Susan herself. In fact, she wrote the book on American Cool and stopped by to chat with me about it right here. Her stories are often set in Las Vegas, the land of sin and glitzy hotels galore, and the perfect theme for a Friday when our thoughts turn to the weekend and a little self-indulgence. (If you love Vegas, her novel 24/7 is a must read!)

Now I know that some of us who’ve shared our stories here in Suite 69 have let a little memoir creep into our fiction (I plead guilty as charged!), but as readers we don’t want to jump to conclusions about this excerpt from Susan's darkly magical "Neon Nights," which appears in The Mammoth Book of Best New Erotica 4 as well as American Cool. Still, I was intrigued to read in a very revealing and kick-ass funny interview by Critical Mick that Susan has actually dated a mob guy. I'm sure there's lots of inspirational writer's material there, but then again the code of silence is strong, and I wouldn't want my curiosity to get me in trouble.... However, there’s no question that Susan knows Vegas very well, so I thought I’d ask for her recommendations for hotels in the city. Here’s what she said:

Mmm, well, for not being a rich person (which I'm not) I have rather fussy tastes about that stuff, so it's sort of lucky in some ways that I gamble so much. I'll only stay at the Wynn or Caesars Palace. I won't even stay at the Bellagio anymore since it's gone a little ghetto with the wannabe party crowd. I can tell you that the Wynn has the most comfy beds ever and it's a world-class facility in every way. And Caesars is just like a home to me, and it's nice, but still has little pockets of old-Vegas tucked in there which delight me.

Got that? Wynn for the beds, Caesar’s for the nostalgia, Las Vegas for hot hotel sex all along the Strip. For our refreshments today, let’s order in some simple, honest Italian food from Caesars' legendary Rao’s. Maybe some signature Lemon Chicken, “broiled to perfection and sauced with Uncle Vincent’s Famous Lemon Sauce that consists of lemon juice, red wine vinegar, olive oil and spices.” Or their classic veal chop, “pan seared and topped off with a medley of cherry peppers hot and sweet; and the meatballs, either alone or accompanied by one of the many pasta dishes, taste as if Aunt Anna were still rolling them each morning.” We vegetarians can dig in to the pasta puttanesca. For dessert? Susan’s homemade chocolate tiramisu, made with pannetone. Give me one of those red-and-white checkered napkins, I'm drooling already.

From "Neon Nights" by Susan DiPlacido
I let him take me back inside. But I steer him into another bar before I make a regrettable mistake. Just the thought of being with him makes my breath go shallow and fevers me, so I know he'll win this battle of wills.

But I'm determined to win the war.

Coy, I put my hand on his thigh. The vibe from him is unmistakable, he's oozing lust worse than I am. I tell him, "I've done nearly everything in this city. All but one thing."

"Yeah, what's that, Rossi?" He downs his fresh drink in one long pull.

"Probably the most traditional one, besides gambling. I've played games, seen lights. They've given me fight tickets and limo rides. I guess it's 'cause I'm a female that they don't offer me hookers."

I shrug. "I won't feel like I've fully experienced the place until I've paid for sex."

"Never knew you swung both ways, babe," he says and raises his eyebrows, lifts his empty glass and chews on some ice. "Can't say I'm totally opposed to the idea."

His jaw throbs and face flushes. Maybe he does have an idea how I'd feel about him getting side action on me.

"Relax," I say and move my hand higher up his thigh. "Maybe you'd be interested in the job."

"Check!" he signals for the waitress.

I slow him down. "You do understand the appeal of it, right?"

"No, you're not getting it, Vin. It's not just sex. It's freedom. It's anything the person wants – at a price. They can talk, they can connect, or they can just fuck. It's as empty or meaningful as they want. But when it's over, it's over. Capisce?"

He looks down at my hand on his leg, then looks away and shakes his head. He capisces.

"Are you fuckin' insane?"

He stares at me, incredulous. But he's not saying no.

I stand up and flip him my room key. I throw money on the table to cover the check, and tell him I'll meet him upstairs.

He grabs my arm. "You're really serious about this?"

"When it's over. It's over. Forever." I pull away and head to the casino office.

I try to stay poised. But as I'm waiting for the elevator, Fly Me To The Moon wafts through the overhead speakers and I can't help but hum along. Vinny opens the door, and I hold the check up high for him to see. A throaty whisper, all he says is my name. "Lana."

In bed, he goes slow at first. His ID bracelet is cool against my skin but his hands are warm as they trace along my skin, heating me. But then he climbs on top of me and takes hold of my wrists, pinning me down. He squeezes tight as he enters me, panting already.

It feels so good, him filling me up, thrusting so deep, hitting exactly the right spot. Hotter, faster, getting me higher, higher. Near frenzied, I buck and try to move to drag it out, but he's got me clamped down tight, his hands hot and rough. The same hands he's used against other men. Vinny's hands that have actually killed men – for me.

That thought makes me come instantly. Hard, shuddering, no escape as he keeps thrusting, lighting me up brighter than all the neon on the strip. Making me feel more alive than winning a million bucks. He says my name, loud, possessive, and then, softly, "Ti amo." And then he quivers and comes too.
Posted by Donna at 9:24 AM

Very Vegas, indeed. Nice time of year to be there, too. We went in June when the temperatures were in the 100s--and I wasn't even in bed with a hot gangster!

What a naughty excerpt! I love Vegas (as I think I may have mentioned, heh), and I love that she suggests getting a prostitute and then points out she wants a male one. :) Nice!

Susan - this really brought me into the scene. I like the focus on the sexiness of power dynamics. Nice to have $2M to throw around, maybe I should try gambling for a change next time I'm in Nevada :)

Craig, Emerald, Mr. Dr. DGS -- thanks so much for checking it out. Generally, computer engineers are hotter than gangsters, but we can't write all our stories about engineers ;)