I live in a city boasting an abundance of hotels, motels and Holiday Inns -- to slightly paraphrase the Sugarhill Gang -- from the tawdry to the refined. I have never bunked in any of them, however, though I have visited people, and when I say visited I don't mean it with quotation marks. EllaRegina has neither hanked nor panked in a Manhattan hotel room, much to her chagrin, mostly because she has her own apartment.

My hotel story offering for Suite 69 is a fun feverish frolic in sunny Mexico, inspired by the ever-awesome Alison Tyler and written for one of her famous flasher contests. In this case we were presented with a lovely Post-it note sketch by the artist behind the website Naked Chicks on Post-it Notes and asked to write a short piece based on what we saw.

Naturally, being the nutty broad I am, I wrote a story involving a man and a woman, then realized -- duh -- we're tawkin' naked CHICKS, yo, so went back and produced a green tale of Lesberotica. (Frankly, I thought the figures looked quite androgynous, myself...) Here is the hetero flasher, slightly edited. This nutty broad always has some loose nuts and bolts to tighten. 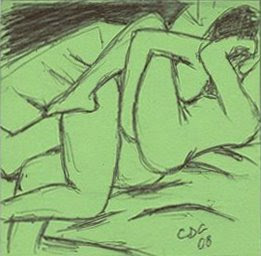 We were fucking green. And it wasn't the food or the water. Yes, we were in Mexico so it could have been either but it wasn't. For starters, the bed in our hotel was made up with sheets the color of guacamole.

And tonight, after a few too many Margaritas, we decided to go all the way. I knew it was only a matter of time before this would happen.

"Tub?" I asked, wanting to be sure. "You mean a 32-ounce container, like what I buy at Whole Foods?"

"No, I mean tub, as in industrial size. Their entire pantry supply. Whatever they have. The other guests are going to be guacamole-free tonight, I'm afraid."

Twenty minutes later a small man carried a white plastic bucket half his height and twice his width into our room and set it down like a sacrificial animal. It was identical in size to the gigantic pail of drywall compound the construction workers had brought to our loft when we were remodeling.

We went into the bathroom and stood in the shower. First he covered me, every part of my body except my pony-tailed sun-washed hair. Then I slathered him, finishing with his heavy cock which immediately gave me a stiff green salute. The guacamole was the perfect consistency. Not too many chunks, nicely thick. It was like getting a full-body facial. And avocados are good for the skin.

All coated, Mexican Martians, we ran to the bed and jumped into the green cotton, some guacamole going splat onto the multicolored tile floor in the process.

Frederic was inside me before I could say ayuda.

His guacamole stirrer fucked me hard. The sound was amazing, like a cartoon inventory of squeaks, slurps and drips. Frederic normally did more than fill me up but this was dinner and a show. The guacamole gave his cock an indescribable additional texture.

I was already wet. This made me wetter, and spreadable.

We were all over each other, really messing up the dip. It rubbed onto the sheets but was invisible, being of the same hue. We scrambled in a south-of-the-border guacamole-mud wrestle.

Frederic licked my every inch -- he was a big fan of avocados -- and when he arrived at my pussy, he got a refreshing midnight snack along with my indigenous flavor. He fucked me until we both came in a psychedelic dream of green. I felt him shoot into me, mixing with the guacamole, and the sensation of it all -- the cool pulpy ooze, his hot offering, cock in war cry shiver as he gave a primal grunt -- was overwhelming. I thought we would both die on the spot. I imagined the hotel staff finding us the next morning, dead, limb-locked in an embrace, streaked with slimy green patches, shaking their heads over yet another pair of guacamole-crazed American tourists. I wondered if the color of our lifeless flesh would go well with avocado green.
Posted by Donna at 9:53 AM

Okay, I need another margarita - I love margaritas. And guacamole. And EllaRegina's stories. This one must have been before I started lurking on Alison's blog.

and good for you too


thanks again for opening Suite 69 for us Donna.

hmmm, so many definitions there

Someone being "eaten" south of the equator?

I don't think Mexico falls in that geographical category, however, but it's food for thought, so to speak.

THANK YOU, Donna, for running my green story at Suite 69!!

(Oh, and the refreshments were perfect! You really know how to throw a party!)

What a fascinating story! Very lovely EllaRegina. :) This falls into the category of "something I don't think I ever would have thought of," lol. I think you've done that a couple times. ;)

Thanks to both of you! And I love guacamole. :)

This lovely story give the notion of "going green" a whole new twist.

My verification word (in appropriate green letters) is rupel.

As in to rupel down a tub of Guacamole.

This definitely has me in an environmental mood. Thanks so much for sharing your tale in Suite 69, ER! It's always a pleasure!

Thank you so much, Emerald, Craig and Jeremy (ha, you do lyrics well!)!

Spreadable is a memorable, E!

I loved this and um, I'm leaving here to look for airfare to Mexico....:-)