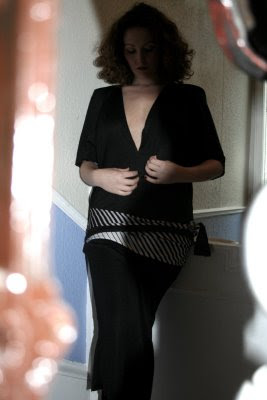 Today’s storyteller brings a nostalgic tone to the party in Suite 69. Maryanne Stahl has been my friend and writing mentor since around about the turn of the millennium when I first became a member of the Zoetrope online writer’s workshop. I was immediately struck by the elegant simplicity of MAS’s prose, which was the perfect vehicle for the quiet wisdom of her stories—as is abundantly exemplified in her two novels, Forgive the Moon and The Opposite Shore. I was a brand-new writer at the time and just starting to write erotic scenes. Naturally when she announced she had a flash piece in the “erotica issue” of The Vestal Review, edited by Mark Budman, I clicked right on over and found myself enchanted yet again. When I decided to invite many of the wonderful writers I know to share their hotel sex stories, I remembered this poignant, turn-of-the-century piece, which has really lingered in my memory.

Nikki Magennis again provides the perfect visual of lovely woman poised on the brink of something. A moment of understanding perhaps?

"New Millennium Sex" by Maryanne Stahl
No one wants to fuck Cheryl anymore. That's what she thinks. Cheryl is doing her laundry in the basement of her apartment building, sorting delicates from the regular load. A Greek woman emptying the one working dryer frowns at her. Cheryl has been caught staring at her own underwear. It is the stain on a pair of gray silk panties that has brought this irrefutable truth—that no one wants to fuck her—to mind.

Cheryl wore the gray silk panties on Thursday, when James took her for dinner and then drinks back at his hotel. They "fooled around" (his words) and he came on her behind. He didn't say as much, but he wouldn't actually fuck her and she didn't expect him to. No one will anymore. It isn't safe, these days (who wants to use a condom the first time?). And, with many of the men she meets (married), it is technically verboten.

You aren't really cheating if you don't fuck. You aren't doing anything dangerous. Cheryl knows this is what James thinks. If his wife ever asks, Did you fuck her? he can rightly answer no. He might, depending on the depth of his character, even add, Of course not!

A blow job is okay. Cheryl gave James a blow job when they fooled around again an hour after the panty stain, just like she gave Tom at that Christmas party and Steve at the beach. Tom also rubbed his dick between her round, wet breasts (he'd poured Chardonnay between them); Steve stuck his fingers so far up inside her, she remembered her next doctor's appointment. All of them licked her and rubbed her and squeezed the cheeks of her ass. They did everything they could think of—after all, they weren't inhibited—everything except fuck.

The laundry room is empty now. Cheryl lifts the gray silk panties from the small pile of delicates and holds them to her face. She tries to smell James, tries to remember the thrilling skip of her breath when he reached for her hand beneath the table, tries to remember the look in his eyes she thought meant he wanted her. As in really. Cheryl breathes deeply, and though the panties smell more like the musty bottom of her bathroom hamper than anything else, she remembers James' skin. She remembers her face pressed into his neck when he told her that she couldn't spend the night. And when at last she tosses the gray silks into the washing machine, another stain has blotted out the first.
Posted by Donna at 8:54 AM

Great story from MAS, and I expect no less. She does rock!

I'm honored, D. (just hope none of my students see this! )