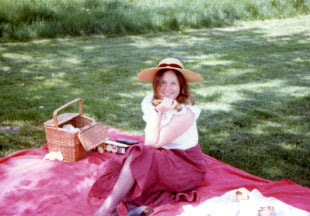 Back before kids, one of my favorite amorous outings was a picnic. I’d dress up in something a little frilly—a skirt was a necessity of course—and pack my special wicker picnic basket with bread, cheese, fruit, fine chocolate and a bottle of red wine. My lover of the moment would haul the basket while I carried the blanket through meadow and forest. We’d wander until we found someplace fairly private on campus or in a park or the woods. The photograph above was taken in May of 1982 during one such picnic during my junior year at Princeton. We were alone to feast and be amorous until a groundskeeper rode by on his lawn mower. Thank heavens for the skirt. And please don’t ask what happened to that poor banana!

First, I’d like to give you a little background about why I have so many Viva’s in my filing cabinet. When I first discovered the wonders of e-bay, I thought of my sister’s naughty magazines and one pictorial in particular. This was my very favorite image story, one I’d return to again and again. I remembered certain scenes very clearly, even after thirty years. Given that my professional life (such as it is) revolves around sexual fantasy, it seemed like good research to find this issue and see how it affected me as an adult. 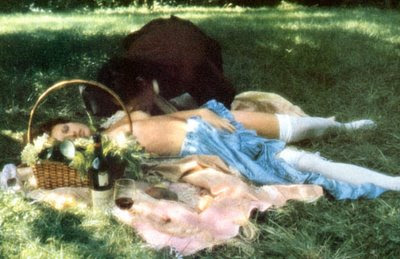 I remembered the story started with a woman in 18th century dress carrying a picnic basket out to the woods. She nibbled fruit and had a little wine. Then, tipsy on booze and the great outdoors, she stretched out on her blanket and pleasured herself. A passing Continental soldier espied the lady and decided to join her. She didn’t mind the company and a merry feast ensued. My best guess was the July 1976 issue, which would surely have something with a Continental soldier, but alas after acquiring the whole year, I discovered I was wrong. Nor did the scene appear in any issue from 1974 or 1975. I had nearly completed my set of early Viva’s before I finally hit the jackpot—December 1973.

To my surprise, even after all these years, “Secrets from My Diary” didn’t disappoint. In fact, it was better than I remembered. There were some especially interesting scenes involving food. For example, the man (not a soldier but a certain Lord Ffetherpenney) eats a wedge of watermelon—or is it mango?—from between the lady’s legs, while she sucks her own fingers. Soft core it is, but nicely suggestive. In another the lady pours wine in the man’s mouth, missing badly and licking the wet stuff off of his lips and chin. There’s a nice butt-kissing scene and another of my favorites: the half-dressed lord carrying the naked woman fireman-style back to his four-poster bed. 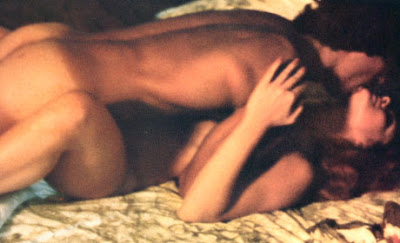 This early pictorial is one of the hottest in my whole collection, so it’s no wonder it stayed with me. Gradually the Viva picture stories become tamer and more posed, more like Gatsby below and by 1976, they all but disappear to be replaced by a Penthouse-style boudoir shoot of a single naked man or sometimes a couple. My sister said she’d heard women didn’t buy Viva anymore; the main purchasers were gay men and this was what they were looking for. She stopped buying new issues after the summer of 1976. Thirty years later, so did I.

But enough about the death of the feminist dream of sexual homogeneity in American culture, let’s get back to me! So, as I was leafing through an old photo album to find that picture of myself dressed as a gay hustler (you’ll find out why next week!), I came across the picnic photo above. And suddenly it struck me. My urge to dress up in long skirts and drag my boyfriends out to the woods, mosquito bites on my butt bedamned, might indeed have originated in my subconscious memories of the diarist and her lord capering en plein air.

In my next post, our tour of Viva continues when I move on to the magazine's most direct contribution to my career as an erotica writer. (Hint: this involves reading. Flashlights at the ready, please!)
Posted by Donna at 3:26 PM

Email ThisBlogThis!Share to TwitterShare to FacebookShare to Pinterest
Labels: my stash, Viva Magazine

Oh, Donna, just look at you in your picnic hat with your open basket!

This was a fascinating narrative—I loved the way you wove together the personal history and magazine critique.

Wow, those are some sexy images, and I can see why you went on a search for those Vivas.

Funny how the magazine degraded in the later years, but isn't that often the case with things that break into new territory?

Oh, and I love the picture of you at your picnic. Methinks Donna was having a good time?!?!

What a fabulous post — makes me want to go have a picnic right now! I have a skirt very similar to the one in your picture (looks so anyway). :)

And I agree, the picture and story you recount sound very hot. It does seem interesting that food was involved juxtaposed with your particular interest, doesn't it? Were you aware of a particular sensual interest in food at the time?

My basket was definitely open, although to be honest, my boyfriend at the time was sort of a jerk. But the picnic was fun ;-).

I totally agree, Craig, that in this case the softness allowed for my imagination to fill in the story, the spaces. I also bought the July 1976 Penthouse which my sister had and there's a pictorial with one soldier and two milkmaids and man it is explicit but it leaves me cold. Not at all arousing. Yet "Diary" still works magic.

Promising, ground-breaking things do often "jump the shark." I'm thinking of "Sex and the City" which was so fabulous the first season and really lost its edge for the most part later. More examples of the same abound.

Thanks so much for reading and stopping by!

Donna, how sweet you are! Little Miss Muffet!

Art imitates life, indeed, or is it the other way around? Hard to know re your chicken/egg question, but surely the seeds for your interests in sex, food and writing were sown early.

I love how the Viva picnic girl complements yours, and the bed snap is H-O-T.

Donna,
That picture of you is adorable. You're so cute. I know what was brewing under that sun hat though. Hmmm...you little dickens, you! I can't help but look at your line up of pictures here and think: before picnic, during picnic, and after picnic.

Oh you're adorable in that picnic getup!