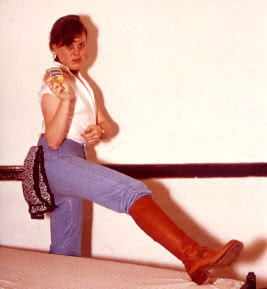 …and hang around in bars. Well, not the bars part, I’ve never been much for bars. But I do have a history of dressing up in my lover’s clothes, just once or twice, to get a better sense of what it might be like to be him.

In fact I wrote a whole story about it, called “Being Bobby,” which you can read over at the wonderful online erotica magazine, Clean Sheets.

“Being Bobby” is about a college-age couple, so I thought it would be fitting to post a photo of myself from those formative years. I’m not dressed in my boyfriend’s clothes here, but I was definitely aiming for the male look.

I was dressed up for a costume party—it was winter, but the clubs at Princeton often had theme events like "come as you aren't"—and since I’d gone as a dance hall girl/prostitute at Halloween, I thought it might be fun to play the flip side and go as a gay hustler. That’s why I have circles under my eyes and carry my own Vaseline. As I recall this costume didn’t get quite the universal acclaim of the hooker outfit (I have a photo of that, too, but you will never see it). Only a few people guessed what I was supposed to be without being told, although I remember raised eyebrows and amused smiles over the Vaseline. By then I’d already gotten a bit of a reputation.

Email ThisBlogThis!Share to TwitterShare to FacebookShare to Pinterest
Labels: Being Bobby, Clean Sheets, Suit and Tie

What a magnificent story, Donna! Hot, thought-provoking, and entertaining! (No big surprises there.)

"For once what she looked like was less important than the things her body could do."

Ah, what a striking line.

"'Do you want me to come on you?' He made the words sound almost romantic."

I actually did find this sweet and moving.

Delightful picture of you, too! :)

Oh and I forgot to say (got so caught up in my enjoyment of "Being Bobby") — I love "Suit and Tie"!

It must be a really good photo if you're not going to show us! ;-)

I've never tried for the male look - just don't have the bod for it.

oh oh, better post this and go plug in my computer - low battery!

Thank you, Emerald! And you know for some of us "Do you want me to come on you?" IS romantic, isn't it?

The hooker photo is...risible. (Love that word, kind of like rinseable). I'd show it to you in person, but there's something a little too revealing about it for the blog world, lol.

Thanks so much, Shanna! Glad you enjoyed it.

Wow! What a gem. So very sexy, and such vivid descriptions. And of course, impeccably crafted.

Loved the tension of her journey and feeling her triumphs, so nicely realized.

Lots of wonderful lines, but I've got to admit "Heavy, entitled footsteps headed right for the stall door" just jumped off the screen.

And hear, hear to that great picture of you too!

Thanks, Craig. It's kinda scary being in the boys' bathroom--entitled footsteps get me every time!

The inclusion of the Vaseline in the costume is the coup de grace. too funny! great story, too!

Do you know the meaning of that particular color bandana? I think there was a code, like pocket semaphore.

Hey ER! I knew there was a code, also the particular pocket meant something. My sister had tons of gay friends and I probably should have asked them--she lived in a loft on the Bowery at that time. Maybe I did ask, but I don't remember, lol.

Now I'm curious as to what I was advertising ;-).

Hold my place! I'm rushing around NY today, but I'm hoping to get some reading time tomorrow, for your CS appearance and your "true confession" fantasy piece. Can't wait!

So, wikipedia says because I was wearing the bandana in my right pocket, I'm saying I'm a bottom. Blue has no particular meaning, although that sort of thing varies. But, given I have the Vaseline, this makes sense!

Hi Donna, wonderful stories, I especially love the scent-sation of cinnamon-cumin-clove. I was right there with her. There is something so sensually intimate about getting into his clothes.

Adorable image, you're so sexy in that androgynous way and I'd say the vaseline might be the coup de gras. ; )

Great concept, and of course it's executed with the trademark DGS brilliance and flair!

I love the thought of a woman lurking behind the flap of a pair of guy's briefs—especially if it's turning her on to lurk there.