The Seduction of Words: An Interview with Lucy Felthouse 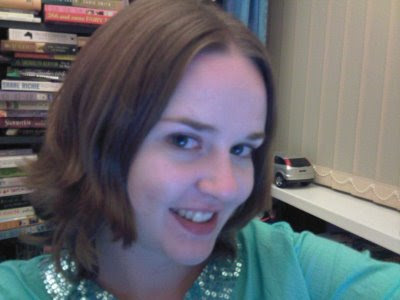 One of the greatest pleasures of writing erotica for me is the chance to get to know my colleagues. I don’t think I’m imagining this—and what’s wrong with a little imagination anyway?—but erotica writers tend to be wittier, more generous, and certainly more fun overall than the average person you meet.

Thanks to the wonders of the Internet, one of my most recent and charming new writer friends is U.K.-based writer Lucy Felthouse, whose work has appeared in Scarlet, Forum, Desire and Xcite’s Seriously Sexy 3. She blogs about the life and times of an erotica writer and hosts an erotica blog that offers tasty tidbits of prose and reviews called Fantasy Nuggets. She’s also contributed stories to Red Rabbit Books.

Lucy has agreed to "fly over" and chat with me today about all of the most important things in life: writing, sex and food. Her insights into the ways of our profession on the other side of the Atlantic show that although America and the U.K. may be separated by a common language, erotica writers the world share a special sensibility—and a love of chocolate!

DGS: How did you first come to write erotica?

Lucy Felthouse: I was dared to do it. No, really! At University I was sitting in the cafeteria with a couple of guy friends and we were chatting about life, love and the like when one of them happened to mention how open-minded I am for a woman. They then continued to say that I should try writing a dirty story. I laughed it off, but then my friend dared me outright to try it. Sure enough, I wrote a story, printed it out and took it back in to University and gave it to the guys involved in the conversation. They loved it and encouraged me to write more--I’ve never stopped!

The main challenge for me in writing erotica is making it fresh. An erotic short story is basically a tale about two (or more!) people having sex. So it’s important to make the situations and characters different enough so that people don’t read several of my stories and think “Oh, that’s just like the other story she wrote.” I have been working on a novel, albeit just planning and in some ways I think it will be easier because there will be a whole wider world and more characters to write about so I won’t have to worry about it being the same as anything else, but in some ways it’s harder because it’ll be my first and I just hope I can see it through!

I really enjoyed your college dissertation on the changing role of women in erotica. Have you had any new insights since you wrote it? Do you have any predictions for the future of erotica?

Thank you. The topic isn’t something that I’ve continued to actively research, but the longer I’ve been writing and the more female readers and writers I’ve talked to, I believe the trend is continuing. Women are becoming less and less worried about constraints and what is ‘acceptable’ in society and embracing the fact that sex isn’t dirty (unless you want it to be!) or wrong, it’s a part of life and there to be enjoyed as well as for recreation. To this end, erotic books and magazines such as Scarlet are read and discussed more openly between friends instead of being something that’s hidden under a pillow and never mentioned.

Do you have a favorite story among those you’ve written so far? Why?

It has to be “Fantasy Assignment,” which appears in Seriously Sexy 3 by Xcite Books. Firstly, because it was the first story I had published in a book, and secondly because it’s quite a personal fantasy to me--I love a man in uniform!

More writing, I guess! I have several short story anthologies that I’m working on stories for at the moment. My aim is to be published in more books by different publishers to get my name out there, and of course to actually get words down on screen for my novel!

Wow, this is a difficult one. OK, the one to trade talents with would be Portia Da Costa because she’s a fabulous writer who’s been writing for a long time and yet still produces stories and novels which are fresh, fun and of course sexy! I’ve enjoyed reading everything she’s written, and she’s a lovely lady too!

Finally, describe a perfect meal that would be guaranteed to seduce you —and if it involves chocolate (I have a feeling it might), please recommend your favorite kind!

This is EASY. I do enjoy my food, though I have simple tastes. It would have to be steak (well done) and chips with cheesy garlic bread for main course. I do have a sweet tooth so I don’t think I could name a favourite dessert. But my favourite chocolate is Cadbury’s--the milk chocolate, not dark.

Thank you so much for talking with me, Lucy. I'm off to get myself a bit of chocolate now.... Good luck with your novel, and I know we'll be seeing much more of your work in the future!
Posted by Donna at 12:27 PM

Wow, thanks for this... and thank you for the gorgeous photo of Paul Rudd. Yum!!x

And I'd love to have dinner with you too, Lucy!

Congrats to both you and Donna on an excellent interview.

Welcome to the Colonies, Lucy!

On a dare? What a great way to get into erotica!

I agree that the role of women in erotica is changing, and I feel that erotica as a whole is better for it. Erotica has become more complete with the strengthening of the female voice within it.

Thanks for a great interview, Donna and Lucy!

Lovely to see you here, Portia. I was thrilled to meet you at the Passionate Ink party last summer and am a big fan of your work, too!

And Craig, I totally agree Lucy's entree into erotica is the ideal way to go. A table full of adoring male fans. Frankly, I'm jealous ;-).

Great interview - and I can't wait to have the time and sit down and read that dissertation - it looks quite interesting. Thanks Donna & welcome Lucy!

Hi, Lucy! Great to see your smiling face here at the wonderful Donna's and learn more about your ideas, your writing, and your "origins" as an erotica writer.

If I come up with a good dare, will you toss me a piece of that yummy garlic bread? ; )

Lovely interview :D I see I have another stop to add to my morning blog route!

Oooh...Cadbury milk chocolate - I'm with you there, Lucy!

l.felthouse said...
This comment has been removed by the author.
4:34 AM

@portia - well then, we must arrange! Not too far geography-wise!

@craig - thank you, and yes I suppose it's interesting, and lucky too or I might never have discovered such an interesting pastime, and such lovely people!

@erob - would be interested to know what you think of the dissertation, it wasn't scored as highly as I hoped, but it was certainly interesting doing the research!

@jeremy - fire away with a dare, but I can't guarantee I'll share my garlic bread...

Great interview Donna and Lucy. You had me all the way until the well done steak ;) I have a question -- do those guys who dared you in the first place know how far you've taken this now? I bet they'd be mighty impressed.

Yes, excellent question, Susan. I think we owe those guys a beer, or a bar of chocolate, for inspiring Lucy in her career!

it's good to see this information in your post, i was looking the same but there was not any proper resource, thanx now i have the link which i was looking for my research.