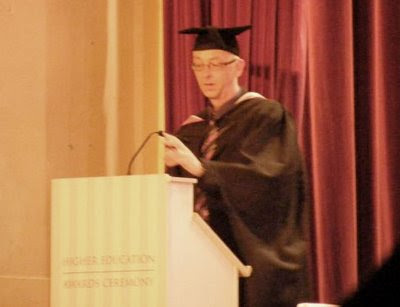 It may seem a leap from an ode to "I Dream of Jeannie" to the graduation ceremony at Lancaster University (John of Gaunt's Lancaster in the UK, not the pale copy I'll be visiting in Pennsylvania in a month), but you can't deny master erotica writer Ashley Lister has much in common with the Barbara Eden character when you're talking amazing talents and feats of wonder.

I can't think of any speaker I'd rather have on the roster at a graduation ceremony, but when I asked Ashley if he used the opportunity to bestow much-needed tips on writing effectively about sex to his listeners, he said he saves that advice for the creative writing classes he's teaching and will continue to teach at the university. (Lucky students!) He reported that since his talk concluded the ceremony he thought "it was mainly a signal to the graduates that the boring graduation ceremony was finished and everyone could rush out to binge on free coffee and cakes." (Mmm, cakes... Maids of Honor? Currant scones with fresh strawberry jam and clotted cream?) The following eloquent quote, however, got high praise from the audience: "In the last three years I’ve been introduced to an array of mind-blowing theories; a wealth of ways to explore my creativity; and a class of great and innovative thinkers who I shall always treasure as friends."

I'm getting a little sniffly, too, actually.

In conclusion, I'd like to extend my congratulations to Ashley for his impressive accomplishment. I wish I could have been in the audience clapping, but trust all of my good wishes will sail smoothly across an ocean.
Posted by Donna at 8:47 AM

What a cool, sweet lady you are. Awesome tribute to Mr. Lister. I don't know him but obviously know his name. Lucky students who find themselves in his writing classes. Hope they appreciate him same way you do. :-)

I'm doffing my mortarboard here. Thank you for saying such kind things.

I shall now be relying you as a resource and mentor when I go on to do either an MA or a PhD.

Bravo, Ashley! You are a scintillating sensualist and a scholar!

Oh hey, look at Ashley in cap and gown! I am seriously impressed with Ashley's accomplishments. There's no doubt he brought a great deal of knowledge and wit to the classroom - on both sides of the podium. Congratulations, Ashley.

Thanks for stopping by everyone. Those Lancaster U. creative writing students are indeed fortunate folks. They're going to learn so much and have fun doing it!

Ah, so there's more skool in your plans, Ashley? Better keep the cap and gown handy then! Dr. Erotica indeed :-).

Yeah, wow, imagine having Ashely as a writing teacher. :) A lovely tribute, Donna, and congratulations Ashley!!

Thank you everyone for all the kind words. When I take the teaching classes on the road I'll make sure you all get front row seats :-)

And thanks again Donna for helping to celebrate the graduation for another day. I must now get on with my work and immerse myself in 'Nasty Little Habbit.'

ah..what a beautiful and deep post..:-)..but is it a wonder? donna turns every post into a pearl of poetry..:-)

i enjoyed reading swinger long ago, even though i prefer the english issue over the the german issue...

What an outstanding tribute, Donna.

Congratulations on the honours, Ashley!

Oh wow, thanks for posting about this, Donna. And congrats to Ashley!

Donna, what a perfectly stated and touching sentiment. I felt that in my heart. :-)

Congratulations Ashley! I'm not at all surprised!

My hat goes off to you, Professor Lister!

I am also standing up and applauding!