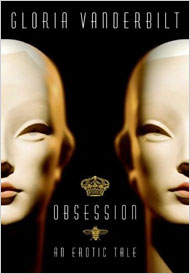 (Actually my sons would not be surprised at all, but they're probably better for it.)

I have mixed feelings about all of this. Vanderbilt is a cultural icon and so does that make it "okay" for a major publishing house to sully its list with her dirty book where others are soundly spurned? Does the resemblance to The Story of O elevate this work to an acceptably classic level perhaps even as it reaffirms the cliche of what literary erotica is--gotta have whips and an orgy mansion where an elite can enjoy the pleasures ordinary folk are not allowed? Fresh from the humiliations of my own efforts to promote erotica, I can only wonder at the industry's willingness to give Vanderbilt full literary and publicity honors. On the other hand, does the publication of such a book open the door to other writers who "dare" to tackle eroticism and "activities of a sort that readers of The New York Times are usually shielded from"? Or do we have to be octogenarian celebrities, freakish and therefore safe, both in terms of sexuality and profit (it currently stands at #461 on Amazon)?

Sadly, I suspect the latter is the case.

Anyway, I haven't totally processed this and so my blog post is somewhat half-baked, more of a question to anyone stopping by about how they feel about this and the issues not so explicitly named: that mainstream publishing uses sex to titillate but rarely delivers, for example. I may read Vanderbilt's novel, if it makes it to my library, which is an interesting question in itself. I'm sure I'll write more on these topics later, but to end on a high note: while I always cast a jaundiced eye toward the publishing industry, I really admire Gloria Vanderbilt for writing this book. Emerald had an interesting post by a less famous octogenarian about her erotic life which moved me deeply. We need more of this and if the first knock on the door comes wrapped up as a celebrity freak show, but opens the way for others, it may be a price worth paying!
Posted by Donna at 7:33 AM

ah - I read about that book - I thought that whenever I see it on the bookstand (not that I'm spending a lot of time in bookstores these days of uncertainty) - but I wasn't too impressed by the "excerpt" I read (can't remember where now).

Unfortunately, I think it's the octogenarian celebrity thing in action.

and I just realized I never completed a sentence there - duh -

whenever I see it I'll pick it up and poke around it.

"Fules" indeed. Robin, I seriously think there is a god and she's sending out the spam words!

Hmm, you weren't impressed with the excerpt? I'm not surprised. Do give a report if you get a chance to read more anytime soon. I do get a big annoyed when this sort of thing stands in for real erotica--you know what I mean, as in Alison's story and Isabel's story--and then we're lectured about how bad the writing in our genre is. Sigh.

aFrantically looks up the word: Octogenarian. ;-)

I think I learned about Ms. Vanderbilt's highly sexual lifestyle from an interview I read about her son, Anderson Cooper - but wasn't aware of the book.

You pose yet another interesting topic for discussion here, Ms. Storey. I need some time to ponder my thoughts and comment later. :-)

Ugh. This sentience in the NYT article makes me shake my head.

But it nevertheless uses vocabulary and describes activities of a sort that readers of The New York Times are usually shielded from.

Who DO they think we are?!?

Were it someone less sexless, less superficial, I could accept it. We all know that in that echelon there are few rules, so her story is not surprising and thereby less interesting. Who cares. There is an interesting parallel in her reference to an architect, if anyone has read The Architect of Desire a scathing account of the sexual exploits and particularly incestuous activities of Stanford White, at the height of the Vanderbilt era.

Thanks for the mention, Donna.

"that mainstream publishing uses sex to titillate but rarely delivers"

Of course, I think this happens not only in the publishing industry but in public society in general, and I have indeed experienced it as frustrating.

I had heard about the book because of an interview with Anderson Cooper in which he talked about it. I appreciated his seeming nonchalance about the subject matter and his mother writing such; I hadn't figured I would read the book, but I would indeed be interested in reviews/perspectives of it, particularly since it seems to on some level be "representing" erotica, as you mention, Donna. (Which, yes, can seem quite frustrating when it seems to earn that position simply by virtue of celebrity, etc.)

More synchronicity, Isabel, I happen to have a copy of Architect of Desire on my shelf waiting to be read! I'll make time for that one, but not Gloria's, from all I hear!

Emerald, I guess on the face of it, Anderson Cooper (a Japanese friend told me my younger son reminds her of him!) is being cool, but my first reaction is to see the background to his "coolness." Which is basically that mothers aren't allowed to be sexual, the grand irony of ironies, and Cooper is being so broad-minded by moving beyond his shock, even given his knowledge of his mother's life already!

Looking forward to hearing your thoughts, too, Neve. Thanks for stopping by all!

Celebrity has always had the power to get published, and ultimately sully a genre, because people will buy crap if a famous name is on the cover.

When the genre is not too well accepted or well known, there is the risk that a bad representative will have a broad effect.

I'm going to have to mull this over too...

Thanks for mentioning it, Donna.

I love Anderson Cooper (who doesn't?). Even from THE MOLE I loved the guy. I did know she was his mom. In fact, a few years back they did a somewhat odd photo spread together for one of the big 'zines -- Vanity Fair or something like that.

She's an odd lady. I hope it does open more doors for erotica. I love it when old people get all sexy. But I guess she's all been a little out there. Such a far cry from an heiress like her to our du jour Paris H. Maybe if Paris (or even Nicki) published a filthy book it'd gain some cred. Maybe one of us lucky bastards could ghostwrite it! Shit. Someone put a call in to them. Oh. Wait. That's right. Their medium is more in film. ;)

We could write a book about it all, and it would be so much more thought provoking than any celebrity exploitation story.

As I mentioned to Donna in an aside, The Architect of Desire is somewhat more thought provoking but again, more celebrity exploitation.

I'm going off to contemplate all of this, thanks Donna.

I have been fortunate or unfortunate to have had many run-ins with celebrities over the years (remember my Burt Bacharach and Carol Bayer Sager experience when I was a young teenager?) I've stood and watched other people point and drool over a long-haired, unshaven and unshowered Brad Pitt at a video rental store in O.County and scratched my head and thought, "for heaven's sakes! He's just a person, like you and me. And damn, he smells bad!" I don't get celebritism. I just don't.

I'm not mainstream America though. I don't think any of us are that tune into this blogosphere channel are mainstream America. I actually have to try and weave the mainstream into my life, just so I'll stay in touch with popular culture. I don't have kids, but do hang out with teenagers and they help me blend. LOL!

With all that said, I do understand why publishers want to tie their pony to a celebrity name, it's a business decision, but it's treading in dangerous waters. Mainstream America will now think all erotica is tied to Ms. Vanderbilt's posh lifestyle: invitation only and Eye's Wide Shut-type of parties. I'm rolling my eyes here.

We all know that us common folk (okay, I'm common folk) like sex. Damn. We (I) love sex. We (I) like it kinky and crazy too, sometimes and I'm no celebrity - at least I don't think so. haha.

I wish these books came with a warning label: This book was published because celebrities sell things. Please keep in mind that there are many, many, many talented writers that haven't fucked other celebrities, but their stories are probably better written and touch on the subject of eroticism in way that celebrates the genre in such a way that you (common folk) will really relate to more so than this writer/celebrity's ridiculous and probably far-fetched fiction fish tale.

p.s. Does anyone know if Ms. Vanderbelt had a ghost writer? Just curious.

Wow, Neve, thank you for your insights into this. I think encountering celebrities as people is one of the antidotes to celebrity worship 'cause they either smell and are rude or they're human in some more pleasant way, but it all boils down to the fact they are just like us and the rest is hot air or smoke and mirrors or whatever metaphor you want to use for "empty."

This book was published because celebrities sell things--I was nodding my head so vigorously, I pulled a muscle. Wouldn't that be awesome to have your warning on books, just like on cigarettes?

Hmm, you know, I didn't even think that Vanderbilt's tale might be...aided by another hand. I would not be surprised at all. Although this is the kind of information that would be leaked as a second-wave publicity blitz after the initial push, right?

"I wish these books came with a warning label: This book was published because celebrities sell things."

LOL! That cracked me up.

Thanks for sharing all that Neve.