Halloween at My House 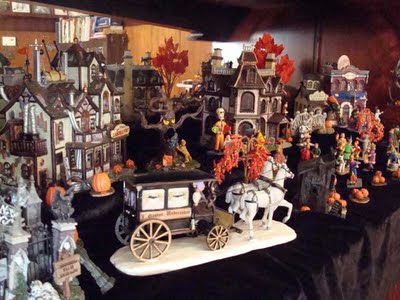 Another quickie today, but I just wanted to share some of the sights and tastes of Halloween at my house this year. Above you see a view of the Halloween Village that magically appears on the shelf of our dining room's built-in china closet sometime around the end of September. It's been a feature of our fall celebration for about seven years. 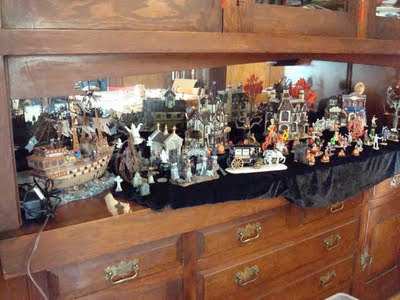 It grew from a single pumpkin stand (center of this photo, far right in the one above) to this well-populated pirate ship port a few figures and buildings at a time over the years--all on sale at Michael's from 30-50% off, of course. My older son used to arrange the figures, but this year my younger son took the baton, and I'd say he did a great job. The village looks especially spooky and mysterious with the lights off so you can appreciate the glowing moon, the gypsy's crystal ball, the weird green throbbing from the graveyard, and the ghosts dancing in the windows of the houses. Some people ask me if I have a Christmas Village, too, but somehow the austerity of the Halloween Village appeals while the candy cane cuteness of the Christmas version just doesn't tickle my fancy. Kind of the way certain erotic fantasies push buttons while others leave you snowy. 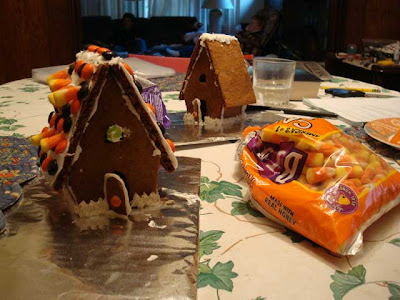 On to the tastes. This year, in preparation for the Festival of Lights at my son's school, I tried out a new gingerbread house recipe using butter rather than shortening. The cookies tasted great--rather like speculoos we ate in Belgium--but the dough was much harder to work with and more fragile, so I think I'll go back to my classic recipe. But since I had a couple of Belgian gingerbread houses lying around, I put my kids to work. Here's my youngest's homemade Halloween house which has been attacked by aliens wielding candy corn missiles. Lots of broken M&M shingles on this poor abode. But a worse fate awaited the house in the background. My older son returned home from school and started eating it before he bothered to decorate it. In no time it resembled the ruined farm houses we saw throughout the Scottish Highlands, the legacy of the enclosure movement when the evil landlords evicted the poor farmers to use the land for sheep. The graffiti on the ruins show the farmers' descendants still remember, and so do I, so the sight of the house sort of depressed me on behalf of all who suffer from economic greed. Then again, maybe I read too much history?

Okay, enough doom and gloom. Last but not least, our costumes! Herr Doktor and I will be heading to a party with my younger son, who has an awesome Jedi costume and a very realistic light saber to light up the night. We'll be a masked couple: a creepy corporate drone in a suit and blank white mask and a Venetian Carnivale goer in a black velvet cape with a lovely silver mask ordered from a real Venetian maskmaker! (I can't help thinking about the countless erotic stories set in Venice--perhaps I'll get lucky with a masked man myself?) My older son is off for some mischief with his friends, having outgrown family entertainment. He'll be Garth from Wayne's World and for some reason, the nerd glasses were really hard to find. Afterward, we're all going to eat cheap, trans-fat laden candy until we swear we can't have any more for about a year. Kit Kat, Snickers, Butterfinger, Baby Ruth... so evil, so yummy, so very Halloween.

But enough about me. What are your Halloween plans?
Posted by Donna at 12:42 PM

You are so awesome with those gingerbread houses, Donna! I think it's funny your son started munching instead of decorating. THAT'S Halloween. Enjoy the party. I've got a Venetian masks, too! Still haven't used it. Put yours to good use.

Wow Donna, I'm so impressed. I LOVE your elaborate decorations! I sure hope we get to see photos of your "ball" costumes -- they sound fabulous. I got as far as roasting some pumpkin seeds this year, but tomorrow is a big party in the city where I can actually get away with wearing little more than a mask and boots. I'm in the mood for dancing ;-) Thanks, as always, for sharing.

I so want some of that gingerbread! That is just fabulous Donna. And Halloween town is wonderful. Although Halloween isn't traditionally celebrated in Italy, because of the quirky place we're in, it is, so we're taking a, 3 yd wide, yarn web and 5 giant paper mache spiders (2 balloons and articulated straws for legs) to help decorate the old town. Our guy is going as a zombie, so I've traded making his elaborate costumes for making an elaborate decoration!

You'll be able to see the festivities here Saturday.
I'm just enjoying the show as me.

Yeah, Susan, I have to say I respect him for just going for the goodies and not fussing with that silly royal icing! I'll try to get some pics, Gina Marie, and hope you'll provide some of your own. Thank you for living the kind of life erotica writers are supposed to be enjoying ;-). Our other decoration is a "Bates Motel" neon sign that I love to light up in the morning for my stretching exercises. It's my October Christmas tree!

Whoah, Isabel, how cool you are bringing Halloween to Italy. I will definitely check out the festivities. I know they love Halloween in France. The gingerbread is tasty. Very buttery, crunchy and mildly spiced. I'm thinking of baking it at Christmas for the soccer coach who can't eat nuts (most of my cookies have almonds, pecans, pistachios, etc).

Wow, your crew really has the Halloween spirit!

Awesome village, kudos to youngest son. I particularly love the alien projectiles. (I have this inexplicable weakness for candy corn.)

Have a great time at the party, and tell oldest son I said Way!

awsome..both the spooky village and the ginger bread houses..:-)
its sad we dont really have halloween here in germany..but we have gingerbreed houses..but for christmas...:-)

how comes i have nowhere read about all you guys thanks giving??? am i just blind and have overread thanx giving posts??

"Here's my youngest's homemade Halloween house which has been attacked by aliens wielding candy corn missiles."

That is so cute!!! :) And what a thoughtful interpretation of your oldest's decorating strategy.

Your village looks delightful, and I can quite understand the appeal of the Halloween one — it really has become one of my favorite holidays. I hope you take pictures of your costumes!

Last night I had a party to attend scheduled, but I was feeling a bit unwell by the time it was upon us, so I passed on it and changed plans at the last minute. I was already all dressed up though, so I got pictures! :) Tonight some friends and I are planning to go to a concert for which we have tickets (to which I was planning to probably wear my costume), but one of those friends is not feeling well herself, so our plans are uncertain at this time.

Like Craig, I for some reason salivate at the thought of candy corn, though I really try to avoid it because I suspect it really has no redeeming nutritional value, lol. Maybe just once a year. ;)

Danielle, Thanksgiving is not until next month in America. :) It's held on the fourth Thursday of November (so this year November 26).

Thanks for sharing Donna, and happy Halloween everyone!!

oh nooo..i m so silly..blushes all over...hobbles into the corner of shame and waits until he gets released from it*

Oh, no need to be embarrassed, Danielle. I mean, what do American's know of St. Martin's Day (although I have some lanterns for 11/11 myself!) I'll be reporting my Thanksgiving menu, naturally, although it isn't traditional at all. Nor are gingerbread houses at Halloween, though they aren't unheard of. We usually do them at Christmas, too. And now my kids DEMAND it.

Well, Emerald, the bag of candy corn says their made with "real honey" so that's good for you, right ;-)? This year the kids got lots of small bags of candy corn--it must be in. But I've liked it since my visits to my grandmother's when she had a glass jar of candy corn YEAR ROUND. Scandalously indulgent!

Lol, no need to be embarrassed indeed Danielle — why would you know when Thanksgiving is here?? Heh, Donna, I think I might have even gotten the cheap crappy kind of candy corn (yes, I utterly indulged and went and bought some last night...) because mine doesn't even say that on the bag! Lol. Ugh.