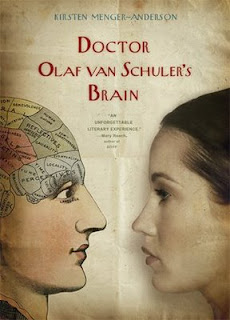 I recently finished a novel-in-stories that was truly one of the most thought-provoking, elegantly written works of literary fiction I’ve read in a long time. The title is Doctor Olaf van Schuler’s Brain (Algonquin Books, 2008), the debut novel of author Kirsten Menger-Anderson. The book has received glowing reviews from The Washington Post, The New York Times, The San Francisco Chronicle…and some of the stories have also appeared in Ploughshares, the Southwest Review, Post Road and the Maryland Review. I tend to regard mainstream critics with a critical eye myself, but in this case, I’m in hearty agreement with their praise. Literary fiction should always be so fresh, relevant, and provocative.

Doctor Olaf van Schuler’s Brain follows the lives of twelve generations of New York City physicians who are trying to better the human condition, each in his or her own misguided way. Rich in historical information, the book offers a light-handed education in medical history as well as an insight into the mixture of arrogance, delusion and faith that still lurks at the heart of medical science today. It grabbed me from the first paragraph and never let go!

Kirsten Menger-Anderson has a real gift for choosing the perfect resonant detail, creating prose that is both evocative and admirably spare. Each story illuminates the experience of the struggling outsider in some way, nudging us to contemplate racism, feminism, poverty, the pain of the immigrant experience, even the modern-day beauty business. What happens in the silences and shifts between the stories is as intriguing as the narratives themselves, and I was reminded again what a pleasure it is for a reader to make her own connections and enjoy “aha” moments. This, of course, is only possible when the author crafts her tale skillfully and with respect for the intelligence of her audience. Most impressive of all was the way the disparate voices “slur” together in a conclusion that works brilliantly to unify the stories.

You can hear excerpts from the book here, performed by professional actors as part of Sally Shore's "The New Short Fiction Series" in L.A.

Fortunately for us, Kirsten has agreed to stop by today to talk about her novel, the writing process and seductive literary dinners. 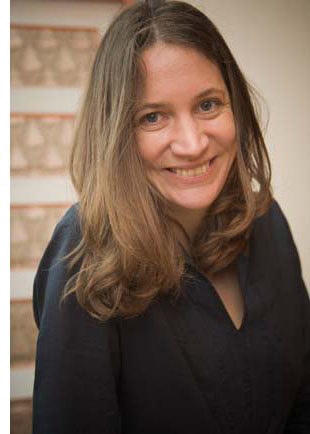 DGS: How did you come to write a novel-in-stories about the history of medicine in America?

KMA: First off, thanks for inviting me to your blog! It's a pleasure to be here.

The history of medicine has intrigued me ever since I looked up "phrenology" in the dictionary and marveled that reading human characteristics in the contours of the skull was once common belief. What other (now discredited) medical ideas have we held, I began to wonder. I discovered the works of Jan Bondeson, Carl Zimmer, and several other medical historians and science writers who tell captivating tales of practices that read like fiction: curative radium, lobotomy, therapies requiring ground millipede and mercury. These techniques and the contemporaneous debates about life, death, and the soul took hold of my imagination. Who were the people who believed humans could birth rabbits? Or that routine bleeding could cure the common cold? I began to look at how doctors and the medical philosophies of previous generations impacted daily life, and I ended up with a book that covers 350 years of medical history.

One of the many pleasures of reading Dr. Olaf van Schuler’s Brain is the wealth of historical detail about New York City over the centuries, which clearly represents a lot of background research. Can you tell us about your process? Do you have any tips for historical research for fiction writers?

Much of my research about New York began with Edwin G. Burrows and Mike Wallace's amazing book Gotham, which tells a detailed history of New York City up until 1898. I looked at maps from different centuries; old documents such as newspaper articles, ship manifests, inventories of various sorts, old family trees; and at drawings and photographs of people and places taken at different points in time. All provided nice windows to the times.

Do you have a particular favorite among the stories? Any that was a special challenge for you to write?

I'm fond of all the stories and characters--I'd be hard pressed to choose a favorite. The last piece was definitely the hardest to write. I tried a number of different final stories: one about a woman in a persistent vegetative state, one set in the future, one that involved captive monkeys. "The Doctors", when I finally managed to write it, felt like the proper ending. But it took me a long time to get there.

That's interesting, because I thought it was a perfect and powerful ending! Now Doctor Olaf van Schuler’s Brain is certainly not erotica, but there were a number of memorable scenes where eroticism plays a key role. This scene from “Salk and Sabin” struck me as an interesting commentary on adolescent sexuality and power play. Joanie, the voyeur, and Walter, the exhibitionist, don’t fully understand what they’re doing, which makes the interaction all the more poignant in the context of what’s going on with the adults in the story. Here's a teaser from the story (the really erotic scene comes later):

I couldn't answer when Mr. Wharton called on me; I didn't even hear his question. I was folding the [note that said "Communist"] in my palm, imagining how I would reinvent myself, how my skin would clear, and how one day I'd return to this school, and whoever had done this would seek me out and beg me to teach about the unions and the strikes. The reason communists weren't more popular, I believe, was entirely aesthetic. Even I acknowledged that my father, with his long chin, thick brows, and hairy nose was particularly unnattractive.

Mr. Wharton tapped his pointer on a wooden chair, staring at me, his jacket missing a button, his trousers so short that his socks showed. The chalkboard was covered with notes I noticed only then: battle diagrams and years, without any indication of significance.

Katherine, who sat behind me, laughed.

"Joanie's wet her underpants," she said softly so that only I and a handful of others heard. I realized then that she'd scrawled the note and placed the gum in my textbook. Her tone revealed it, and the fact that she knew I was upset. I can picture her placing the gum between her lips, cheeks wide and fat as a pregnant belly. People think she is beautiful, but she laughs like hard change in a beggar's cup, her pale hand sporting Walter Thompson's class ring. I know she lets him touch her. Secret places, dark places. After school, after she lingers at the back of the room to apply the red lipstick my father forbids me to wear, I follow them to Central Park and watch as Walter slips his hands under her skirt. She's never seen me, but he did once. He was kissing her, but looking at me. He was watching me and I him and for the first time I was equal. I, too, had a chance at winning his heart. I'd felt such a thrill then, I'd turned and run.

What was your experience doing the “sex scenes” for the novel?

What’s next for you?
I'm currently working on a novel about a field ecologist who travels to Ecuador to study butterflies.

F. Scott Fitzgerald! Probably not for a week in the Catskills, though. For that I'd have to think of someone who prefers hiking to golf. Or someone who might want to blow off both the trout fishing and the golf and just spend a week reading and writing.

I'm a Fitzgerald fan, too--and I definitely hear you about the lure of reading and writing over fishing. Now for our last question, please describe a perfect meal that would be guaranteed to seduce you—into a deep conversation about the writing life, if not something even juicier!
For me, the perfect meal has a lot to do with location. I love to eat outdoors—a picnic in the park or a dinner on a roof top. Wine, bread, cheese, fresh fruit. And tomatoes (good tomatoes. The best ones I know of in the Bay Area are the dry farmed ones from Two Dog farm). And some chocolate, of course.

Thanks so much for the interview, Kirsten! Doctor Olaf van Schuler’s Brain is a book that leaves a reader with more questions than answers, but I certainly appreciate the insights you gave us today. For more on Kirsten’s experience promoting the book, check out the interview at the Erotica Readers and Writers Association blog.
Posted by Donna at 9:45 AM

It is, indeed, a wonderful book. I too am interested in the human narratives of medicine, and I so admire the intelligence and grace Kirsten has brought to Dr. Olaf.

I also completely agree about the ideal dining experience being al fresco-- and the wine, bread, fruit, cheese and chocolate! Let's do this, the three of us, in the not too distant future!

I highly recommend it, Robin! And I also love picnics and simple, but delicious food. Tomato season is coming up pretty soon, too. I'd love to do an SF al fresco writer's lunch some day soon.

Count me in! I'll keep tabs on the farmer's market and let you know when I see the goods...

Aw, great interview Donna and Kirsten. And this IS a great book!