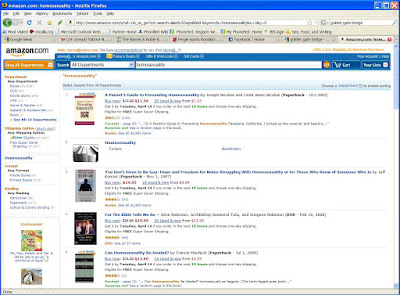 It all makes sense now! Amazon has removed all gay and lesbian themed books from their general searches EXCEPT the following. Yes, type in "homosexuality" and you get A Parent's Guide to Preventing Homosexuality among other enlightened tomes. As a parent, I'm so relieved (not). If they're going to be the Amazon Fundamentalist Christian Bookstore, be honest with your name. And where's the big picture of Jesus on the homepage?

If you wanted to come up with a politically embarrassing list of books that Amazon is "recommending," you could do no better than this screen shot. Some commenters are claiming this is a "glitch with the database," but I can assure you there is some policy-making going on at some level. Amazon has a lot of explaining to do if they want their customers back. Either that or get that Jesus picture up on the homepage pronto, Jeff Bezos!

I can only hope that the Internet, which made Amazon what it is, can bring it down for doing this.
Posted by Donna at 7:48 PM

I did the same search earlier and nearly lost it. A lovely Easter present from Amazon.

There is also a theory floating about that this is the work of trolls on a holiday weekend. Time will tell.

The troll theory doesn't really work because how could they wipe out whole categories of books? And my book was targeted on Thursday. But maybe this has been a slower, insidious process.

Even so, Amazon has to come out and apologize. Or go down!

I had problems searching for stuff quite awhile ago - in March to be exact - I think they started tinkering before - it was just really "discovered" in the past week. This is an interesting discussion.

It's all about the MetaData.

Thanks, Robin. That is interesting! I am so riveted on this discussion, it seriously is scary. I want Amazon to explain and change back or they will never get another penny from me. Should be interesting to see how it plays out.

Apparently, this has been going on since February already. So it's NOT a glitch or the result of trolls messing around.


Now that it's big news, other authors are telling their side that's it's been a while, not some sudden thing that happened over night.