Do You Have A Virgin Ear? 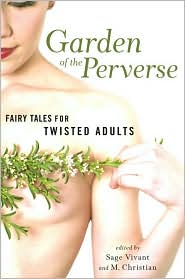 Herr Doktor DGS and I haven't had the chance for one of our weekend wine parties in about a month. First one or another of us has been suffering from a cold. Then last weekend we skipped our liquid ruby indulgence for a nicer reason--meeting M. Christian and Sage Vivant for mai tai's and pupu platter treats at the Fairmont Hotel's famed Tonga Room, a South Seas fantasy bar complete with periodic rain storms. Getting tropically toasted with M. and Sage was of course a lot of fun, and it reminded me of my story that appeared in their anthology Garden of the Perverse: Fairy Tales for Twisted Adults, which is still selling well on Amazon (and I'd know, wouldn't I?)

The name of this story is "Virgin Ear" and it's supposed to be a fairy tale but it's actually one of the most autobiographical stories I've ever written. I'd like to share an excerpt from the opening section, about a young woman who experiences an unusual defloration that enables her to hear penises talk. The events of that autumn afternoon actually did happen to me. As for my magical ability to converse with penises? Well, maybe there are some professional secrets it might be best not to share....

Not so long ago nor particularly far away, there lived a young woman with a very special power. Gina--for that is our heroine’s name--did not always possess this power. She was born an ordinary girl, although in an extraordinary time. The ways of the kingdom were changing thanks to a magic pill that, it was promised, would enable the fair sex to perform as well as men in the bedroom and the boardroom. Perhaps even better.

Gina listened, wide-eyed, to the fairies, the pretty golden-haired one with big glasses, and the crone with her wise, rasping voice, who urged her to wake from the age-old enchantment that kept females chained and coy. Their tales stirred her mind with a bright, burning hunger to scale the patriarchy’s slippery bastions to earn the title doctor or professor or CEO. Her body burned, too, but with darker longings for pleasures of the flesh, not the tepid tearoom fare of married love, but a groaning board of male bodies spread out for her delectation, to choose or discard as fancy moved her, names strictly optional. Her immediate quest, in short, was to "do it" like a man.

But, sadly, in spite of so many nights wrestling naked strangers on waterbeds, too many mornings groping for the name of the man asleep beside her, deep in her heart, she heard no trumpets of triumph for her mastery of this time-honored sport of the male tribe. There was nothing but silence. That is, until one crisp afternoon in the autumn of her nineteenth year.

On this fateful Friday, Gina was sitting at her desk in her dorm room reading Jane Eyre. Now and then she paused to gaze through the mullioned window to the gray stone spires and archways of her college. Here the noble youth of her country were sent to be instilled with the qualities of leadership, though many chose instead to consume a surfeit of intoxicating beverages and couple awkwardly on narrow dormitory beds.

Into the hallway of her suite lurched a young man who, by the smell of him, had already downed a few cocktails. He was her roommate’s boyfriend, a fellow named Jim from the balmy southern reaches of the realm, so Gina nodded a greeting and returned to her reading. She was at first only dimly aware of his voice as he chatted with her roommate at the door, a deep, lazy river drifting through the words on the page. But slowly, as if by magic, the feisty exchange between Jane and Mr. Rochester faded into very different words: Jim’s drawling joke about a farmer’s daughter and her X-rated obsession with an overgrown zucchini, punctuated by her roommate’s giggles.

“Hey, watch it out there! You’re offending my virgin ears,” Gina called, a smile in her voice in spite of her words. In truth, bawdy talk amused her.

“We’ll have to do something about that,” Jim shouted back and before she knew it, he was beside her, jeans unzipped, putting his penis in her ear. She laughed and let it happen. Laughing and letting it happen pretty much described her sex life in college.

It was over almost before it began: a wiggling softness in the hollow of her ear, a glimpse of his baby-pink tube of flesh as he tucked himself in his briefs, zipped his fly and went back to the hallway, to his girlfriend, to the world where everyone knows exactly what will happen next.
Later that evening, Gina stood before the bathroom mirror looking for some sign that something important had happened to her. She had done the very same thing after she lost—or to be more accurate, foisted onto the first willing taker—the virginity that seemed to matter most to the elders of the kingdom. That time, to her disappointment, she saw no outward change at all. Even inside, there was nothing but a lingering whisper of soreness between her legs. But this night, as she turned her head from side to side to study her ears, the debauched one seemed quite noticeably fuller and rosier in hue. It was hotter to the touch, too, and as she circled the ridges and valleys with her fingertip, the mild tingling sensation began to grow until it was just short of an ache.

As if it wanted more.

Did it—she--want more? Gina shook her head. Her reflection agreed, but her ear gave the lie with its hungry, insistent throbbing. It all came back so easily, the velvet warmth of entry, the friction of his member against the faintly oiled cup of her auricle, the surprisingly perfect mating of her ear with the pliant helmet of a cock in repose.

Gina gazed into her own eyes, her lips curving into a smile. It made her special to have just one virgin ear. She understood that her ear and her life had been transformed—irrevocably opened to something strange and new—but she imagined this change was small, secret, within her control.

That was her first mistake.
Posted by Donna at 1:23 PM

Oh! I love that! *must get that book*

Here the noble youth of her country were sent to be instilled with the qualities of leadership, though many chose instead to consume a surfeit of intoxicating beverages and couple awkwardly on narrow dormitory beds.

Sounds like my oldest daughter's first year of college. Hehehe. (I was a commuter student - no such fun)

Interesting that your daughter passed on an accurate report of her freshman year! I kept my activities a bit quieter, but that was a different time ;-).

It was mainly a recounting of her roommate's activities. My daughter had a long-distance serious boyfriend (6 years later still together). She claims she was traumatized by her roommates late night assignations (while she pretended heavy sleep). Hahaha. Methinks she did not inherit some of my proclivities.

And except for a few occasions, (which she did tell me about) she wasn't fond enought of the aftereffects of the surfeit of intoxicating beverages to indulge too often.

What an inspired fairy-tale concept—and so beautifully narrated!

Now my mind is reeling with talking-penis jokes (adapted from classic non-penis jokes) ...

"I have to confess—I'm a fraud. My penis can't really talk. The scrotum is a ventriloquist."

"Penis, you can talk! I'm amazed. Why, in twenty years of marriage, you've never before said a word!"

"Well, up until now, everything was okay."

"I love being a vagina," said the vagina.

"That's nice," said the nipple, "but I wouldn't want to be anything besides a nipple."

"Suit yourselves," said the penis. "I'm very happy as a penis."

Jeremy--thank you for these jokes! A good laugh always helps brighten the day :-0.

Donna, that is so wonderful! I love the rhythm and tone of your writing. Glorious!

"She laughed and let it happen. Laughing and letting it happen pretty much described her sex life in college."

Jeremy, do you have other speaking and non-speaking parts too?

Thanks for stopping by, MAS and Kirsten! Shall I put on a kettle for tea and we can talk food and drink and college adventures ;-)?