My Lips are Sealed: Amorous Adventures in Hollywood, episode two 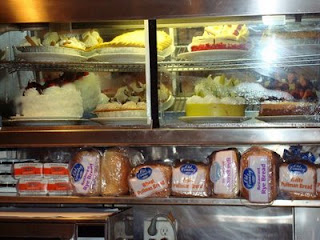 Between the Hustler Hollywood reading and my radio interview at Dr. Susan Block’s LA hideaway, I had forty-eight hours of “me” time to explore and experience Hollywood and environs. I’d say I took fairly good advantage of the opportunity, notebook and camera always in hand for story ideas! This part won’t exactly be a blow-by-blow as that would test your attention span beyond reasonable limits, so I’ll try to confine myself to a few highlights and a few pithy observations about life in the fantasy factory.

First, morning at the Beverly Hills Hotel. Breakfast was included with my room, but I wasn’t sure if room service was covered (my preference, as I could pretend I was having a tryst and wanted to remain discreet—more on that soon). When I checked out my copy of the L.A. Times, I discovered has the most interesting real estate section around with reports stars’ homes up for sale. This week’s featured offerings were Britney Spears’ famous abode and Leeza Gibbons and her “estranged” husband’s manor. Kind of sad to have the dirty laundry so public, but such are the wages of fame.

Both mornings I met my relatives for breakfast at the Fountain Coffee Shop one flight down from the lobby—we ate early as they were on East Coast time (I’m naturally on East Coast time, too). My guidebook recommended this as a cheap way to experience the BHH because “you never know who might be sitting on the stool next to you slurping a chocolate malt.” I found the place interesting for slightly different reasons. First of all, everyone does look up when you arrive at this diminutive place with a single counter seating about 15. They clearly are hoping you’ll be famous and even when the eyes register “don’t know her,” you can see them wondering if you’re a stealth important person, like an agent or a spouse or a mistress or something. One morning we did sit close to a James Dean-esque fellow from the UK who responded to the waitress’s queries about his wife in a rather suggestive way. He said wife had a bad night and he was required to “sleep elsewhere.” I thought Brits were generally more close-mouthed about such things, but I was glad for the teasing revelation. She was clearly the alpha-dog in the relationship, but of course, her pretty boy had no need to mention her Name, so that’s left to my imagination.

One point that came home to me again and again at the BHH was the homey, human quality of the place tucked inside all the glamour and pedigree. For example, the food at the Fountain Coffee Shop was reminiscent of the Greek diners in New Jersey. Mile-high cakes were displayed in a small case next to sliced bread in plastic (see above). The silver dollar pancakes were squeezed from a mustard-style bottle and the hash browns were fried en masse and kept warm at the back of the grill.

I had their oatmeal with raisin compote (dipped from a stainless steal cylinder with a ladle) and a bottomless cup of decaf, both of which were superior to the usual diner fare but not spectacular. But the quantity was generous--a rather old-fashioned combination. I drink coffee once or twice a week in my ordinary life, but on vacation I down the stuff greedily, as long as they keep pouring! To be honest, the food at the legendary Polo Lounge was nothing to blog about either. It’s as if the chefs don’t need to bother with organic, gourmet, clever food. What was good enough for Elizabeth Taylor in 1960 is good enough for today’s guests, right? The inflated price is for history, not flavor.

Speaking of famous folk, my brother-in-law spotted a producer of very popular show as he entered one of the more discreetly located elevators, which went up to the fourth floor (not all of them do) where the suites are located. Said producer was in the company of a lovely young lady who didn’t seem to be his daughter—in fact, the couple looked rather annoyed to be joined by another guest. Rumor has it, the BHH is second only to Chateau Marmont as an assignation palace. My instincts about my room were apparently correct, although mine might have been more in the price-range for a screenwriter and a minor actress/actor. Now, I’m not going to mention the name of this producer on my blog (although I might spill the beans in private, if you pour me a nice wine or Kirsten Monroe whips up one of her lovely meals for me), because as a guest of the Beverly Hills Hotel, you are required to sign a pledge that you will honor the secrets of other guests as you’d hope they honor yours—or they’ll divulge the contents of your wastebaskets to the National Enquirer. Not really, but it seems the right thing to keep mum, if I want to go back some day with my head held high. (Btw, Susan DiPlacido, who knows fancy, show-biz hotels, tells me I should’ve tipped Brendan. Sorry, Brendan—I was in my “kept woman” mode at the time!) 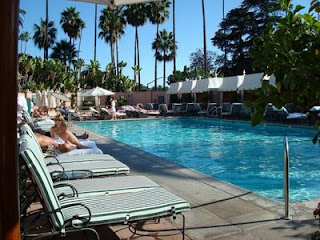 Of course, I’m already in trouble with the staff. One afternoon I headed down to check out the “famous” pool (what isn’t untouched by celebrity there?) and was snapping a few photos for this blog, including one of an empty private cabana which you can rent for some hundreds of dollars a day, when a pink-shirted blond pool boy approached me and scolded that no photography was allowed at the hotel. This was a surprise, because I’d been merrily snapping away in my room, as you know. I half-expected my camera to be confiscated, like in a movie of a hapless tourist trapped behind the Iron Curtain, but apparently it was enough to retreat from the area with a cease and desist. Later I realized the policy was meant to protect famous people from the paparazzi who were after some look-at-that-cellulite pics of stars and deal-makers. Clearly I was not a savvy insider, but I’m trying to learn! Anyway, since I did get away with it in the end, check out the bare legs for any familiar famous appendages—the producer and his companion, perhaps? (Though they've probably washed up and gone back to work long ago ;-) 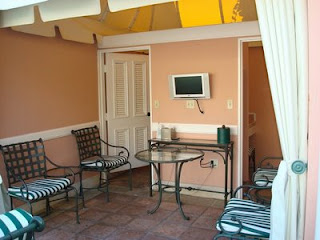 Okay, this is getting too long already, plus I'm feeling naughty enough showing off my contraband photos. I’ll stop here for today and talk more about Frank and Musso’s, Hollywood Forever, Grauman’s Chinese Theatre and other Hollywood sites next time. And then on to the most surprising part of my trip by far. I'm still not sure I've recovered.... See you then!
Posted by Donna at 1:00 PM

No, don't stop! Even I can't wait for the next installment. Ah well, I'll be back for more tomorrow...

Neat! It sounds so interesting and looks quite lovely. Glad it sounds like you're still enjoying yourself! :)

Looking forward to the next installment.

Yes, you are naughty! More! More!

Me too! Am waiting for the next installment. I love your little stories about your trip. They don't go anywhere near the usual, "oh no, not the trip photos/stories" you feel when everyone pulls out their family vacation stuff.