The Dark Side of Martha Stewart 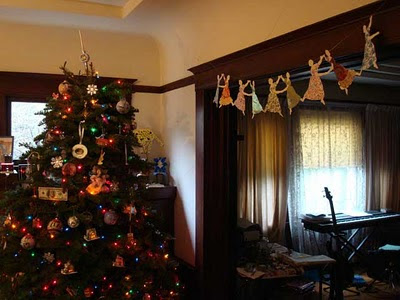 Back in my childhood, a lot of mothers I knew baked fancy cookies or made Christmas crafts and it was just part of what moms did. No one called them names. Like "Martha Stewart." Yes, nowadays, you can barely make a fancy meal, much less whip up a gingerbread house or homemade decoration, without someone dubbing you an insider-trading convict. In case you haven't figured out my stand on this issue, I hate it. I am not Martha Stewart. Martha Stewart is not really Martha Stewart anymore either. She hasn't been for some time; perhaps she never was. And even if and when she was, she had a very dark side. 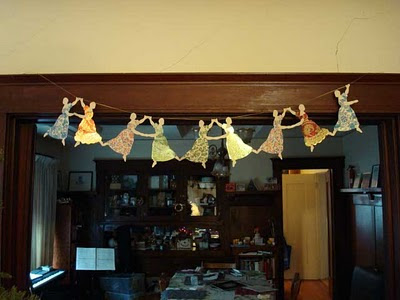 A case in point. Here we have a festoon of the nine ladies dancing. 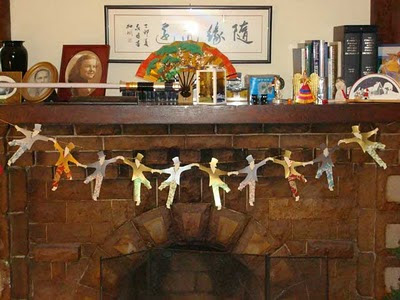 And here are the ten lords a-leaping draped across my California craftsman mantel.

So I got me to the fancy paper store down by the interstate and purchased lots of fancy paper for the figures and costumes. Then I went home and reread Martha's instructions. I sensed right away something was off. Martha told me to fold the paper accordion-style, trace one figure and cut them all out at the same time. I knew that this wouldn't work at all--there'd be slippage and the figures would look crooked and uneven. So I ended up tracing each figure separately, which took much longer than I thought. Cutting out the different costumes took even more time. Part of me wonders if Martha didn't want me to fuck up, so my figures didn't look better than hers. But they look fine, so there. 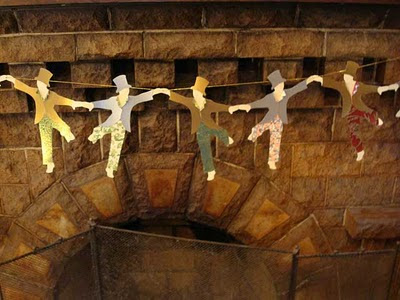 Needless to say, the project was not completed by Christmas 2004. I finished the ladies the following January, and managed to do a bit more on the lords. But with one thing or the other, like having a life, I never finished them until December 2009. I was actually gluing on their coats when our tall, fully-laden Christmas tree tipped over onto the carpet. Part of me kind of blames Martha for that, too. 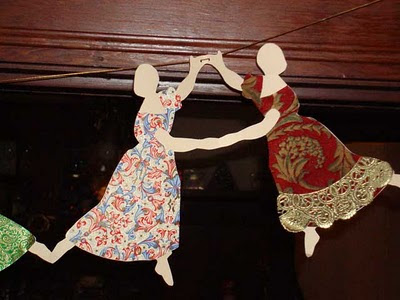 Yet, in another way, I am proud of myself for finally finishing a project I conceived so long ago. I like to think I'm the kind of person who gets it done... eventually. (And I'm definitely hoping this is true for my next novel). To celebrate, I made a recipe from the same crafts-from-Christmas-songs magazine that appealed to me, not to mention I happened to have some extra heavy cream (not the ultra-pasteurized kind) in the fridge after making my brother-in-law his annual batch of Hanukkah pecan cookies. I've never heard of the Eggnog Panna Cotta Carol, but I can forgive Martha that stretch of theme. The thing is, the instructions were misleading in this recipe, too. Martha, or one of her minions, said you should bring the milk to a boil. What? You never boil milk unless you want it to taste scorched and clean up a lot of boiled-over scum from your stove! Fortunately, I knew enough to be on guard, so I scalded the milk and all was well.

In spite of my complaints, I do recommend this dessert as a simple way to get your daily eggnog requirement for the holidays. And this project doesn't even take five years to complete! So here's a slightly revised recipe for 12 3 oz. servings of (Unboiled) Eggnog Panna Cotta (I only made half since we had tons of cookies to eat, too).

Prepare an ice bath in a large bowl. Set aside. Scald two cups of milk in a small saucepan over medium-high heat. Combine egg yolks and sugar in a medium bowl; whisk until mixture is frothy. Pour half the hot milk into egg mixture, whisking constantly. Return to pan; cook over low heat, stirring constantly with a wooden spoon, until the mixture is thick enough to coat the back of the spoon.

Remove from heat and immediately stir in 1 1/2 cups chilled milk and the cream. Pour through a fine sieve into a large bowl set over the ice bath. Add rum, and season with nutmeg. Let cool completely. It took about 30 minutes--enough time to go pick up my son from school.

Place 1/2 cup of the eggnog in a bowl and sprinkle the gelatin over the top; let stand until the gelatin is softened, about 5 minutes. Pour remaining eggnog into a saucepan, and place over medium heat. Cook until it is barely steaming. Add gelatin mixture, and stir to dissolve. Strain through a fine sieve. Divide among 12 3 0z. ramekins. Grate a bit more nutmeg over each to make it look pretty and appealing (my idea, not Martha's) and cover with plastic wrap. Refrigerate until set, 2 1/2 to 3 hours.

With this, my musings and meditations on the holiday season come to a close. In a few short days comes the Epiphany, when the lords and ladies will dance back into their box until next December. Wishing you all many epiphanies of your own!
Posted by Donna at 1:04 PM

I totally feel for you, getting slapped with "Martha Stewart" as a slur just for doing some fancy cooking or decorating. I know I've encountered other examples of that sort of unfair name-slinging ... as if one celebrity's fame or notoriety threatens to ruin an entire genre of activity for the rest of us. Good for you for paying it no heed!

You know, your creativity fills so many facets of your life, and it's wonderful. Those ladies and lords are truly lovely! This panna cotta sounds yum, too!

What beautiful, lovely homemade decorations! Congratulations on their completion!

Happy post-holiday season to you. :)

I love the lords and ladies.

There's no doubt about it, you're one of a kind. Thanks for sharing some of your Christmas cheer!

ahhh..i hate it..even me get slapped with martha steward..but i get " you behave like martha steward on crack"..thanks..:-/ just because i like nice holydays and stuff..and like to cook..and..er..enough of me

Thank you, everyone, for not calling me "Martha Stewart"! And of course for your appreciation of my craft project. Something about the year-end holidays brings out the child in all of us, and getting busy with scissors, colored paper and glue has a timeless appeal...well, now and then, lol.

I hope your New Year is going well!

Those Lords and Ladies are adorable Donna! And I adore Panna Cotta!! And isn't it wonderful to get a glimpse into Donna's beautiful house!!!

Beautifully done Donna and here's to many epiphanies and a wonderful 2010.

Thank you, Isabel. 2010 means it's only two more years until our family trip to Italia!

Those are beyond gorgeous. Want! But it would take me years too...

You know, I feel you about the Martha label, but with me, it's oh Jo, you're such an earth mother.

Danielle. You know it's not just because you like to cook... and you're proud of it really :D

The lords and ladies are stunning. I *wish* someone would call me Martha Stewart. I really admire your ability to make beautiful and/or yummy stuff.

Jo and Jane, thanks so much for stopping by! The panna cotta is all gone, but I'm making some fudge today (the New Year's Resolution not to eat dessert for the next 5,000 years is officially going by the wayside!)