It's Good to Be Bad! 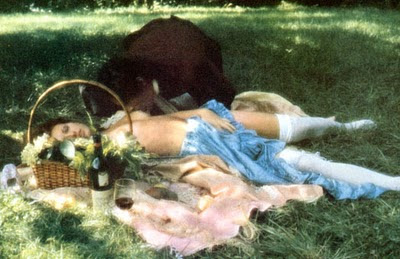 In my feverish summer imagination, July has always been a woman, with flowing, flag-colored skirts offering me juicy peaches and melons. August? A fiery male, half-dressed in an imperial toga, face as sun-baked as the Tuscan hills. He offers iced tea and a thick-fingered, ready hand to smear my back with sunscreen, but he also waves around "back to school sale" flyers, when I'd really rather not think about that quite so early. Even though back to school for me now means more writing time.

Writing time, yeah, my novel, yeah, well I have made some progress on that, thanks to my ongoing exercise in public accountability, otherwise known as my column at ERWA, "Cooking up a Storey." This month's offering, Doing Wrong to Get it Right: Feisty Characters,
Dramatic Discoveries, and Outlaw Ice Cream Sandwiches, is all about the surprises I'm encountering on my second trip down the perilous path of novel writing, in particular, some lawless, kinky characters who are already doing things that make me blush. Seems I'm always hanging out with perverts these days, but I love you all. Honest.

And if you're brave enough to make it through a tumble between the sheets with my shameless characters, you'll be rewarded with a recipe for "Outlaw" Ice Cream Sandwiches. These aren't your packaged, processed, bland-vanilla-ice cream-like substance-pressed-between-two-tasteless-brown wafers. I'm talking tender homemade chocolate chip cookies getting cozy with a slab of cookie dough ice cream or whatever fancy, decadent flavor turns you on. But there is a danger, so beware--family and friend might never settle for store-bought ones again!

Also up at ERWA this month, a review by the ever-witty Ashley Lister of Rachel Kramer Bussel's Fast Girls, which includes my story "Waxing Eloquent." Come to think of it, Brazilian waxes--the featured sexual fetish of my story--are a perfect theme for bikini season. I'll be posting an excerpt from my story during the official blog tour, but you can get a sneak preview right now. Trust me, it's hotter than sizzling summer sunshine.
Posted by Donna at 11:55 AM

Email ThisBlogThis!Share to TwitterShare to FacebookShare to Pinterest
Labels: Cooking Up a Storey

oh that sounded hot first when you spokeabout the month..and then all juicy and delish when ypou came down on your recipe..:-)

did i already begged for that brown sugar ice cream recipe?...

ps: glad to hear you make effords on your book:-)

Thanks for the cookie recipe, Donna. I will try it out. And so glad to hear your characters are being so bad. (And I, too, love "Treasure of the Sierra Madre." Every time someone says "stinkin'" I think of it. "We don't need no stinkin' outline" your characters tell you. Fine! Roll with it.

Another fan of "Treasure of the Sierra Madre" fan chimes in!

After months of planning, outlining, working up character profiles and starting a “discovery,” otherwise known as “first,” draft of my novel, my most important discovery is that even I, the author, have no idea where my story is going to take me next.

I'm right in the midst of that dynamic myself. It drives me crazy but I love it!

Wow, with your characters already so vivid in your column, I can only begin to imagine how full of life they'll be when they come to full fruition in the novel!

Hey Danielle, Yeah I should do a parade of the months, each one a different sex partner, lol. Now the brown sugar ice cream recipe is DeDe Sorensen's so I'll have to get her permission, but it is worth begging for, believe me!

Susan, you know your voice is one of the good ones in my head, and I continue to roll around in those sweaty sheets, saying sure, if it scares me and fascinates me, my readers might feel that way, too. If it bores me, I KNOW they'll feel that way, too!

Oh, Craig, it is a trying place to be, but would we have it any other way? Good luck with your feisty fictional outlaws!

And Jeremy, well, golly gee, I sure hope they continue to challenge and surprise me. These guys are really into emotional drama, though. It's exhausting, lol.

I'm late reading it, but great column, Donna! I especially love the revelation about authenticity of the creative process and that you have to "please yourself" as a foundation of pleasing readers. :)

It's intriguing as well to learn of your characters' free-spirited actions! I so look forward to reading where they have taken you(/us)!

Thank you for sharing as usual. :)