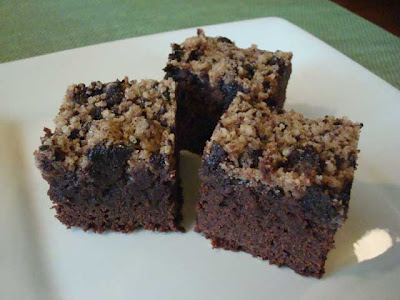 I've been away from my computer for a few days--busy with soccer games, fall parties and our local street fair, as well as a trip into San Francisco yesterday. We had our first rain of the fall season, and fall is seeping into my skin and my sensibility in other ways, too.

These treats are very rich, yet I'd say they fall on the cake end of the brownie scale. Rather like Kinsey has the sexual preference scale, there's also an official cakey versus fudgy brownie measurement...okay, I just made it up...but if 0 is basically unbaked batter and 10 is "could be pound cake," these brownies are about a bi-textural 6. I know fudgy brownies are cooler in culinary circles these days, a cookie version of flourless chocolate torte, but I have a secret fondness for the cakey kind mom used to make, and in fact I probably bake these a bit too long. Some day I'll have the courage to take them out of the oven when the toothpick is still slick with melted batter just to see if they're better fudgy. But they're pretty irresistible just the way I made them on Saturday.

Imagine you're holding in your fingers a tall, dense square of buttery chocolate confection, fragrant with teasing hints of almond extract and cinnamon. You'll be tempted to bite off the topping. I rarely resist the urge, but sometimes I open my mouth wide to taste the mixture of chocolate and topping. In any case these are best eaten slowly, as befits the first ritual food of autumn. Soon I'll be making the butternut squash-barley-black bean casserole, the chestnut risotto, pumpkin muffins, pancakes and pudding, then cranberry-Grand Marnier sauce for Thanksgiving. But it all starts with a slow, finger-licking affair with a couple of these little beauties.

Fearless home chef Susan DiPlacido, famous for her feasts that draw standing ovations, and I were talking about our mutual love of brownies and as usual Susan's humor and passion on the topic inspired me to surprising creative acts. I realized I love blondies, too, and concocted--in my mind, not yet on the plate--a new ice cream sundae which I'll call the "24th Street Sundae" in honor of the San Francisco street that runs from affluent Noe Valley to the Mission. This grand dessert would consist of a square of my signature Mexican chocolate brownie beside a rich blondie. Each would be twinned with a small scoop of homemade Mexican vanilla bean ice cream. The scoop beside the brownie would be drizzled in a golden praline sauce, the scoop beside the blondie would be adorned with cinnamon-spiked chocolate sauce. Softly whipped fresh cream optional.

Sound good? Maybe I should try this at my next dinner party? In the meantime, if you're a brownie fan, definitely try this south of the border version. But don't take it to a potluck, because you might find yourself baking them year after year....

In a large bowl set over a pan of barely simmering water, stir butter and unsweetened chocolate until melted and smooth. Remove from heat and whisk in brown sugar and granulated sugar. Add eggs one at a time, whisking well after each addition. Whisk in vanilla and almond extract. Stir in flour, cinnamon, baking powder and salt until well blended. (Do not beat with a mixer, it toughens the texture).

Spread batter level in a buttered and floured 9” x 13” baking pan. Squeeze handfuls of Mexican chocolate streusel until it sticks together, then crumble into chunks evenly over the surface of the batter. Press lightly into batter.

Bake brownies in a 325 degree oven until a wooden skewer inserted in the center comes out with moist crumbs attached, 30-35 minutes (my oven takes up to 45 minutes). Let cool in pan on a rack for at least 20 minutes, then cut into 48 squares. If making up to one day ahead cool completely then wrap uncut brownies airtight.

Chop two 2 oz. tablets of sweet Mexican chocolate with cinnamon (like Ibarra or Nestle) by hand into medium-fine pieces. In a medium bowl, mix 10 Tablespoons (1/2 cup plus 2 Tablespoons) all purpose flour and 5 Tablespoons firmly packed brown sugar until well blended. Add 6 Tablespoons butter and rub in with your fingers until mixture forms coarse crumbs, then mix in chopped chocolate. Or mix flour and sugar in food processor, add butter and pulse, then pour into bowl with chocolate and squeeze with hands until clumps form.

This recipe was adapted from Sunset Magazine 9/04--I cut down the chocolate from 9 oz. and added more streusel from the original. And I bake it longer. Cause I'm chicken!
Posted by Donna at 11:46 AM

i dont tell you that i love it because i m sure you know already that i do..dont you?...anyway i know what i ll bake next weekend for my boys....thank you for sharing this:-)

It's a very chocolate-y recipe, Danielle--do you think your boys can handle it? I think 7 oz. of chopped unsweetened chocolate would work fine in the batter. Oh, and do they sell Mexican drinking chocolate tablets in Germany? They're not all that easy to find outside of California and the southwest, I think. Although I haven't looked, lol.

Love means never having to say I'm sorry. Or I love you. Or something like that ;-).

Okay, you have my attention.

I am a brownie fanatic, and I do love your scale. I know for sure I could handle, and love, the Mexican Chocolate Brownies.

I'll eat any brownie, from batter to pound cake - love it! Can't eat them right now though - I will bookmark this post for some other time. We love Ibarra around here (and can't get it - our CA relatives give it to us as gifts, or my husband brings it home from business trips - right now we're all out - boo hoo). I love the streusel topping - it sounds wonderful. As does your sundae. Of course that's probably more carbs than I've had in the past week!

*wipes the drool from the screen*

Ah, another brownie fan, Craig? I think there's a link with erotica writing. Are you a fudgy man or a cakey man?

Oh, my, Robin, yes, there are five trillion grams of carbs in my dessert. Now I do hope you can have a nibble of 70% chocolate now and then. The doctors say it's good for you now. And walnuts, too. How about gourmet dark chocolate chips and walnuts? That's kind of like a low carb brownie, right?

The picture is pretty sinful, isn't it, Neve? Arousing all kinds of dark (chocolate) desires. I hope blogger doesn't close me down for this....

I think you're right Donna, there is a clear link between the power of brownies and erotica writing. No doubt about it!

Though I appreciate both sorts, and will happily devour either kind, my tastes lean toward the fudgy variety.

Oh, and compliments to Herr Doktor on the delectable photos.

Well, that picture sure makes me want one. Or at least a bite. My love of chocolate seems to be the main reason for an appreciation in me of brownies, as I've historically not been much of a pastry/baked good fan (with the exception of chocolate cake — heh, note the chocolate link again). I think I prefer cakier brownies.

Of course, it seemed to me I wasn't a fan of pecan bars when I arrived in Gettysburg several weeks ago, but when I had one of yours, Donna, I practically went weak in the knees! So I can only imagine how I would respond to a brownie you made....

pekan bars??? i m going to die..i love pecan everything...and in germany they rarely bake anything with pekan nuts...:-//// the only thing i can get here is pekan cake for 6 euro a tiny piece at starbucks..sigh*

Interesting, Craig, I would have pegged you as a fudgy guy, actually. I swing both ways, but something about cakey has the pull of home to me. We don't like underdone things in PA Dutch country!

And yes, Marina, the brownies are extremely seductive and far more satisfying than many men I've dated ;-).

Wow, Emerald, are you sure the weak knees weren't just an intense rush of sugar, lol? I think if you don't eat many sweets, these things can make you a little woozy, in a mostly good way. Don't tell anyone, but it's my secret plan to conquer the world with cookies--that is, if erotica doesn't work....

Okay, the Kinsey scale for brownies is hilarious! Well done, Donna, well done. I am definitely going to try these. I don't think I've ever mixed almond flavor with chocolate before, so this is something all new. Also never had a blondie. (ikr, but true) Thanks for this recipe!