Rhonda Laurel is my guest today with news of her hot-off-the-presses novel, The Blake Legacy. So settle in with your glass of holiday eggnog for an excerpt from the book and don't forget to enter the giveaways! 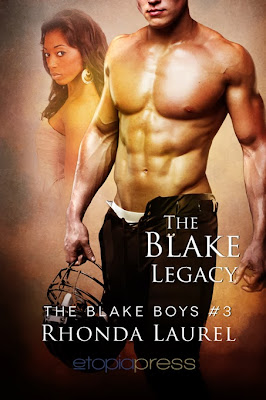 The Blake Legacy (Book 4 in The Blake Boys series)
See the book trailer and buy the novel at Amazon US, Amazon UK, Barnes and Noble and ARe

NFL quarterback Seth Blake is having an unbelievable hot streak—he’s won his third Super Bowl title the same day his wife Morgan gave birth to their son. Life couldn’t be better for the new father and MVP. His contract with the Philadelphia Titans expires in a year, giving him a chance to make a professional dream come true: to play in his home state for the Texas Wildcats and return to his much-missed Twelve Horseshoes Ranch—this time, for good.

Morgan Reed-Blake has never been happier. She’s got the best husband, the cutest baby, and she’s successfully juggling career and family. Her bookstore is expanding, her charitable organization is growing, and she’s been offered her dream job on the literacy council. Everything in her Philadelphia world is coming up roses. Until Seth’s contract with the Titans expires, and his dream of returning home comes close enough to touch…and the powers that be in Texas start romancing Seth in earnest. Morgan and Seth both have dreams. But a choice has to be made…

As soon as Seth stepped into the crowded amphitheater, his team began chanting their battle cry. Cameras started flashing and reporters fired questions at him from around the room. He moved toward the stage and was greeted by his good friend and team mate Patton Hawkes. Patton gave him a hug and took a seat next to Seth at the center table.

“Seth, how’s your wife?” a reporter yelled from the back of the room.

“She’s fine. The baby’s fine. I couldn’t ask for a better day than this.” Seth ran a hand over his face.

“Boy or girl?” someone else shouted.

“A boy. His name is Seth Jacob Blake Jr. And before anyone asks, he will be a quarterback.” Seth grinned and winked.

The room erupted in laughter. Technical questions about the game began to flow, and he was grateful he could answer on autopilot. He congratulated the team and reinforced the group effort involved to win, thanking each of them for playing their best. Everyone agreed that his fifty-five yard pass to Lamont to score the winning touchdown was the greatest play of the game.

“How does it feel to achieve three Super Bowl wins in a row, something no team has ever achieved before?” The million-dollar question came from the back of the room.

Seth tugged on his ear. “It feels great, but it’s also a humbling experience. This achievement shows how dedicated every player was on the team to doing our jobs, and in the process we made a little football history.”

“Being three time MVP ain’t bad either, is it?”

“The honor of being named MVP is never to be taken lightly, and I have much respect for it. Somebody thought I was doing something right, and I appreciate that. But if I didn’t work with exceptional people, there would be no title.”

“Seth, what were you thinking when you threw the ball to Lamont?” a sports reporter for Sports Now yelled out.

“I was thinking, Lamont, if you never catch another pass I throw you, this is the one you should catch.” Seth laughed.

“Were you aware your wife was in labor during the game?”

“No. She told my family that under no circumstances was anyone allowed to tell me she was in labor until the game was over.” He shook his head, smiling.

Patton grabbed the microphone off the stand in front of him. “And before anyone asks, I am the godfather to his son.”

There was rumbling among the team about why Patton should have the honor. Seth covered his mic with his hand, leaned over, and whispered to Patton, “Thanks, man.”

“They’ll get over it,” Patton spoke into his microphone.

Damn. The rumblings grew louder. Seth had to defuse the situation before it blew up in his face. “Our wives are good friends. Nina was always there to help Morgan during the pregnancy.”

His teammates kept grumbling but gradually went quiet, and Seth tried not to wipe sweat off his brow. Questions about the game resumed, and Seth fired off responses as quickly as he could, anxious to get back to his family. He didn’t want to miss a minute of the first day of his son’s life. He did his best to be polite, but after forty-five minutes, he informed everyone he was headed back upstairs. After a brief conversation with Daniel and his agent, Luke, Seth slipped out a side door and headed for the elevator.

“Great game today,” a familiar voice said from the direction of the reception area.

Seth turned to see T.K. Holbrook, a friend of his father’s and one of the richest men in Texas. T.K. was also the owner of the football team the Texas Tomcats. T.K. had courted Seth throughout his football career to play for him, but timing was never on their side.

“And congratulations on your baby boy. John Jacob let me get a peek at him; he’s a handsome little devil. I see a Super Bowl in his future.”

“If he does, then maybe a Blake will finally play for the Tomcats.” T.K. winked at him.

The elevator door opened, and Seth held out his hand to keep it ajar.

T.K. hitched up his pants. “I knew you could do it. I knew you would take the Titans to glory when you signed that contract. I regret I couldn’t get to you first.”

“Well, the timing wasn’t right. Things seemed to have fallen into place for a reason.” Seth smiled.

T.K. nodded at Seth’s sentiment. “You’ve given them three Super Bowl wins. I knew you were a champion the first time I saw you play in grade school. Your father and I would talk about that all the time when you were a boy. We both knew you’d be in the Hall of Fame one day.”

“It’s a little early for that. But everything I’ve done in my career was to work toward being an exemplary player and to make my family proud.” Seth held out his hand again when the elevator door began making a jerking movement.

“Well, you’ve definitely done that. Listen, I know you want to get back to your family. Congratulations again.”

“Thank you for stopping by, T.K. I appreciate it.” Seth nodded.

“Your contract with the Titans is up in a year, right?” T.K. rubbed his chin.

Seth had to think about it for a moment. There had been so much going on he’d forgotten about his expiring contract. “Yes,” Seth said as he stepped inside the elevator.

T.K. smiled and tipped his hat.

The elevator doors closed, leaving Seth alone to process T.K’s surprise visit. A few years ago the possibility of playing in Texas would have been his biggest dream come true.

The elevator opened again, and he was surprised to see the corridor leading to Morgan’s room empty. Seth gently opened the door to her room to find her nursing the baby.

Morgan looked up when he walked in. “We were just talking about you.”

“Is that right?” Seth sat on the bed and caressed her cheek.

“I was telling Jake about what a great game his dad played today.”

“It was not my idea. The family got together and decided that S.J. sounded pretentious. Your father said he looked like a Jake. After that decision was made, they shifted to where he would go to college. I kicked everyone out.” Morgan flashed a cheesy smile.

Seth shook his head. “You didn’t.”

“I love them all, but they were driving me crazy. I threatened to institute a demerit system on visitation tomorrow. How did the press conference go?”

“I told everyone you were holding the next Blake quarterback in your arms.”

Morgan giggled. “No pressure on your son at all. Your dad brought in this man he said was an old friend of the family. His name was T.K. Holbrook. Did you see him?”

“I ran into him downstairs.” Seth moved her bangs out of her eyes for her. Her hands were a bit full after all.

“Good. He seemed anxious to talk to you. I got the feeling it was about more than a congratulatory chat. What did he say?” Morgan furrowed her eyebrows.

“He wanted to congratulate me on the baby and the win today.”

The sound of Jake’s suckling noises echoed through the room.

Seth couldn’t help but grin. “Boy is he hungry.”

“He’s going to have your big appetite.”

Seth kept watching, entranced. Morgan had to cough to bring his attention back to her face.

“You do know my breasts won’t remain this size?”

“Well, if I go back down to my normal cup size, maybe you’ll start looking me in the face again.” Morgan arched her eyebrow.

Seth held his hand to his chest, feigning indignation. “I beg your pardon. I was just admiring the luscious view.”

“Well, I got a spare tire to go with the bigger boobs.” She groaned.

“Morgan Blake, you are beautiful, right now, just the way you are.” Seth kissed her tenderly on the lips.


Thanks for stopping by, Rhonda!

Thanks for hosting me Donna!

It's my pleasure, Rhonda!