Jolie du Pre's Iridescence: Do Judge a Book by its Cover 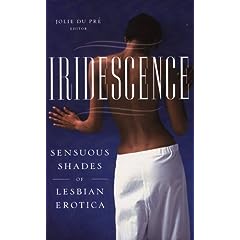 “Don’t judge a book by its cover.” Everyone’s heard that bit of wisdom and yet, well, I do generally judge a book by its cover, at least on the first go-round. Even though I know now the editor and/or author has little say in the matter (unless s/he’s famous and powerful). Sometimes it’s a mistake to do this. Fortunately, with Jolie du Pre’s Iridescence: Sensuous Shades of Lesbian Erotica the cover and what’s inside are a perfect match.

And my, oh my, do I love that cover. The background blue is strangely mesmerizing. I happen to like dark shades of blue anyway, but this one is so rich and deep, drawing me into it. Somehow the hue shifts just a bit with each blink. Now it’s a bit more violet, now blacker, now with a touch of bright peacock. Then there’s the gorgeous sinuous line of that dark-skinned female torso, the graceful, yet powerful-looking hand, the delicious contrast of the skin with the white cloth wrapped around her hips. (Is Jolie the model? Could be….) After staring for far too long—remember, my house is a mess and I should be vacuuming, not enraptured by book covers—it strikes me that the cover is a perfect preview of what the stories inside provide.

And that is something more than just hot, sexy stories. They are hot and sexy and juicy and if that’s what you’re looking for, you won’t be disappointed. But as I read, I realized there was something else going on for me which sort of confused me at first because it was new. I was actually caring about the characters as women, as people. I REALLY wanted them to get together with their new lovers or find solace with their long-time partners. I haven’t read a lot of erotic romance—that new gold-mine of a genre—but this struck me as a very romantic collection of stories. I’ve been into looking up words in the dictionary recently, words I thought I understood, but I’m going to refrain this time, because my personal definition is what matters here as a reader. For me romance isn’t necessarily roses and chocolates or gorgeous lovers sweeping down to save me. All it really means is that it makes a difference who you have sex with and it matters to them that they’re having sex with you. Perhaps that is a female thing, but I think this was the case for every character in Iridescence and that’s what made me relate so closely.

I’ll mention a few favorite stories, the ones that stayed with me for days after I read them. Starting off the anthology with Fiona Zedde’s “Night Music” was a wise choice, I think, for immediately all of the reader’s senses are engaged. The narrator, Rhiannon, is drawn to a striking-looked and very talented violinist named Zoya. After the concert, Zoya invites Rhiannon to her dressing room for a delicious meal in which chilled fruit and curried chicken salad are followed by a most luscious dessert involving leather bonds and knowing tongues and a concert of lovely sounds of pleasure. As I reread the story, I admired again the sensuality vibrating in the prose as well as the action. It’s a great story.

We move on to CB Potts’ “Test Your Luck,” stepping from the polished world of the concert hall to a gritty, downbeat Native American Casino. After a rough night on the beat as a Tribal Policewoman, Sesi comes home to her lover Marlee. Again, the sex is hot, but it’s not just that. There’s such deep feeling here in a single kiss—“all the anger, all the fear, all the sorrow and all the terror”—that someone feels when her lover in danger every time she goes off to work. The sex that follows is more than just sex. It’s always more than just sex in a good piece of fiction.

“Grease” by Isabelle Gray is the third story, and this is where I realized this was a special book. Often when I’m reading erotica, I’m like—okay this intro stuff is fine, but when are they going to have sex? Here I enjoyed every minute of the build-up. The narrator and her girlfriend Tia were just so likeable and human, I wanted them to get together and dine on homemade tamales and have sizzling sex. It was as if I were there with them, wanting what they wanted. And getting what they got!

Another standout for me was Teresa Noelle Roberts’ “Special Delivery.” I myself frequent a few Indian restaurants in the neighborhood and there are a few hostesses who are lovely and intriguing and seem to harbor mysterious secrets. Thus is was refreshing and gratifying to get to know the real woman, Amy, behind the sari and the Kama Sutra fantasy, in this case “a special delivery of a hot American dyke.” Bring on the sag paneer, baby!

Last but not least, Jolie du Pre’s “Monisha” is another story that tugs on my heart as well as my groin. Is there anything more depressing than spending Christmas alone? Worse still, the protagonist, Gladys, is cut off from her family because she’s been honest about her sexuality and they can’t handle it. Fortunately, she’s invited for Christmas dinner by a sexy woman who works in her favorite coffee shop, but of course the turkey isn’t the most memorable part of the evening. The ending is warm and bittersweet, and it lingers, just as a memory does in real life.

I could go on and on about Dylynn DeSaint’s dressing room tryst in “Shopping in New York” or Cheyenne Blue’s “Glory B.”—but in short, this is a collection worth reading and thinking about. Recently I’ve started corresponding with a guy who saw my ERWA Circle of Friends bio and he asked me about the goals I’m reaching for in my writing. For better or worse I think I’ve moved beyond “finding my voice,” or avoiding the pitfalls of a beginning writer like using passive voice or whatever. What I want to do is write stories that touch people and change their lives in some small way. It sounds simple perhaps, but it is in fact very, very difficult. In Iridescence, I have some very good examples to study.
Posted by Donna at 8:50 PM

Email ThisBlogThis!Share to TwitterShare to FacebookShare to Pinterest
Labels: writing

Hi Donna, I just typed my name into Google and your blog came up as my name is also Donna George!
I live in Sydney, Australia..
Im 40yrs old
married
my email is belladonna_33@hotmail.com