Kay Jaybee and the Pleasure of Waiting 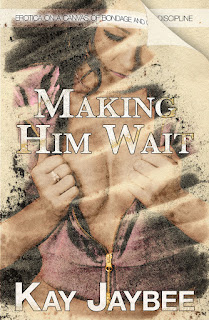 December is a time for enjoying good food, getting together with friends, and curling up with a good book on a dark winter’s evening.  What better time to invite some of my new writer friends to my blog to talk about our craft?  Today I have the great pleasure of welcoming Kay Jaybee.  We’ve been in quite a few erotica anthologies together, and I always smile when I see her name, because I know the story’s going to be great.  I’m very excited to learn more about her latest novel and her writing secrets.

Tell us about your new book, Kay.

Many thanks for inviting me along today, Donna.

My latest novel is called Making Him Wait (Sweetmeats Press, 2012). I had so much fun writing this novel. The concept of how people deal with elements of their own self control, and the emotions involved in holding back from longed for physical desire fascinates me, and formed the basis of the plotline.  Here's the blurb:

But, when Theo Hunter enters her life, she is presented with a new challenge. Maddie sets out to test his resolve as she teases, torments and toys with him. But, as Maddie drives Theo to breaking point, she soon becomes unsure whether her own resolve will hold out!

At the same time, Maddie must put on the exhibition of a lifetime. As the hottest gallery in town clamours for her best work, Maddie pushes her models harder and higher until they are physically, sexually and emotionally exhausted. Will Maddie’s models continue to submit to her, or will she push them too far? And will she be ready for the exhibition in time?

The only way to find out is to wait and see…and the waiting only makes it sweeter!

I definitely find sweet things more satisfying when I have to wait a little.  Could you share a favorite passage with us?

Here’s a scene from Making Him Wait to tease you with:

“...Freya and Sara arrived at the same time, chatting excitedly as they let themselves in, flushed and flattered at being asked to take part in Maddie’s forthcoming show.

Although they’d never met before, Maddie was relieved to see that they were getting on so well. She wasn’t at all sure how they’d get on with Tania, though.

The would-be models had dressed exactly as Maddie had requested. In their black jeans and buttoned up white shirts, they smiled nervously at Tania, who was lounging full length on the sofa in ostentatiously expensive, bottle-green, designer trousers and a cream linen top that miraculously didn’t seem to either crease or pick up dirty marks despite the dabs of charcoal which always seemed to get all over the room.

In an attempt to stop her relatively novice models being intimidated by Tania, Maddie called them to the other side of the studio, where she’d lined up the three pieces of art that were ready for the gallery...

...The artist’s eyes strayed from one of her companions to the other. Temporarily forgetting that Tania was in the background, she reached out her free hand to Sara and felt the simultaneous increase in both the girls’ pulses. Their arousal as they observed each other’s nakedness, captured forever before them, was palpable. Maddie noticed how their pupils dilated as they continued to regard themselves and each other on paper. This boded well for the artwork she intended to create that afternoon.

“Hello.” Freya smiled shyly while Sara simply inclined her head, uncertain of the over-confident woman who had wrapped an arm around her shoulder.

“I have a brilliant idea, Mads. You wouldn’t mind if I positioned the girls for you, would you?” Tugging gently at the two models, Tania was leading them towards the sofa before anyone had the chance to protest. “Don’t worry girls. Maddie will tell you – I am better at choreographing than she is. I have worked with some of the best in the business, after all.”

Sara peeped nervously at the artist, whose face had taken on a furrow of annoyance. Freya, her intrinsic timidity still evident, also looked to Maddie for reassurance and was relieved when she broke the awkward silence.

“Tania, I have already decided how I would like the girls to pose – as long as they agree of course. I do not make my models do what they don’t wish to do.”

“Nonsense.” Tania brushed away Maddie’s words as if they were unimportant.

“Taking people outside of their comfort zone makes for much better artwork.”

Biting the inside of her cheeks, Maddie took a silent count of three before pointedly lifting Tania’s arms away from Sara and Freya. “I appreciate your help, but I have this sorted, thank you.”

“You have got to learn to trust me, darling. I have worked with professionals, you know.” Tania manoeuvred an uncertain Freya nearer the sofa. “Now be a dear and sit on the edge for me.”

“I am a professional,” Maddie hissed at her ex. “If you can’t stop interfering I am going to chuck you out, whether I need your modelling skills or not.”

Tania laughed. “Don’t be so ungracious, Mads. Honestly, I don’t know what’s happened to you since I left. Your manners seem to have deserted you.”

Freya and Sara exchanged a startled glance. Tania was so not the type of person they’d expected to be one of Maddie’s past partners.

Flashing her eyelashes as if she was a child after a lollipop, the redhead continued. “I think the least you could do, as I am granting you a favour here, is to see what my idea actually is. You might even love it.”

Knowing that Tania wouldn’t give up until everyone in the room was thoroughly embarrassed or exasperated, Maddie turned to her invited guests. “Would you mind sitting as Tania has asked for a minute. Then we can get on with what I’ve already planned.”

Giving Tania a glare that would have sent a lesser mortal cowering, Maddie gestured towards the sofa. “Well, show us then if you’re going to!”

Ignoring her ex’s angry tone, Tania took hold of Freya and pushed her so that her bottom remained perched on the very front edge of the sofa with her neck and shoulders resting on the back of the sofa. Then, lifting the blonde’s arms, one at a time, she placed them so they stretched out along the top of the seat back.

“You are a treat to position, Freya.” As Tania let go of Freya and turned her attention to Sara, Maddie could already see where this was going. And, annoyingly, it was going to look incredible. Damn Tania. Maddie really didn’t want her ex’s set to be an improvement on hers.

Holding her tongue for the time being, Maddie nodded reassuringly to Sara as she was instructed to sit astride Freya’s marginally parted legs. The artist wondered how the young women, unfamiliar to each other, felt as they were manoeuvred into a blatantly kinky position. How would they cope, sitting in close proximity for a prolonged period without being able to so much as kiss each other?...

...Uncaring that Sara was struggling to ignore the heat of Freya’s denim clad legs as it radiated up from beneath her, Tania moulded her into the shape she required. One of Sara’s hands was placed at Freya’s neck, so it appeared as if she was pushing at her chin to hold her still. Sara’s other hand was then semi-raised, her palm outstretched as if she was about to slap the pale woman’s right breast.

Freya and Sara’s bodies both gave involuntary shivers as they realised what their pose implied. Their eyes caught each other’s for a split second. They looked away with a haste that told everyone in the studio precisely what they’d been thinking.

“So,” Tania joined Maddie at the end of the purple seat. “If you drew them from here it would be brilliant, don’t you think? Especially if they were naked...”’

A very sweet tease indeed!  I myself love to read and write about the magic of the artistic process—and of course to ask other writers about their own inspirations.  How do you find time to write?

This has been such an exciting year for me, and I can hardly wait for the next years projects to begin!  I have a non-erotic novel in production, which I plan to have finished by the end of February. Then, I am delighted to announce, I will be starting to write the sequel to The Perfect Submissive, which will (hopefully), be out by the end of 2013. There will also be a third novel next year--but that one is top secret for now!!

Finally, here’s a question I love to ask visitors to Sex, Food and Writing.  Could you name a writer (living or dead) you’d like to invite to dinner and what would you serve her/him?

It’s so tempting to name an author I already know well, because any excuse to catch up with my author friends is always welcome!  There are so many people I’d love to meet over dinner, yourself included Donna. However, I think top of my list has to be Jordan La Rousse from www.OystersandChocolate.com I had the pleasure of meeting her business partner, Samantha Sade a few years ago. She was so wonderful--we had an excellent curry in London’s Covent Garden.  If Jordan came to my place, I’d cook her a traditional British Roast dinner, with all the trimmings (switching Roast Beef for a Nut Roast if she’s a veggie!!) I would love that to really happen!!

I’m sure it will someday.  If it’s December, I hope you’ll include some mince pies for dessert.  Thanks so much for stopping by and sharing your work, Kay. Please keep writing your smart, sexy stories--and, by the way, I LOVE your author photo! 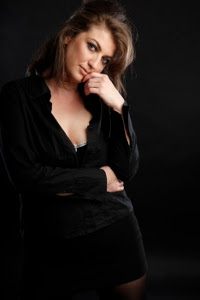 All of her books are available on Amazon UK and Amazon.com, as well as all other good book and e-retailers. You can find Making Him Wait at:

A true pleasure to have you, Kay!

Having been through a couple of photo shoots myself, I appreciate how, while it might look effortless, there's a lot of synergy between photographer and model (as your excerpt shows ;-). A good photographer brings out the best in her/his subject, but it's not as easy as it looks. Yours is the perfect erotica author photo!